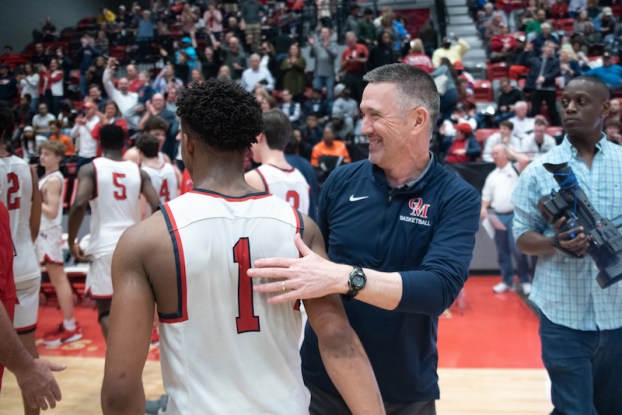 Oak Mountain head basketball coach Chris Love has been named the 2019-20 Coach of the Year in Shelby County after leading the Eagles to their first Final Four in school history despite three sophomores in the starting lineup. (Reporter photo/Keith McCoy)

This year, Oak Mountain had its best season in school history with the Eagles advancing to the Final Four, and despite three sophomores and just one senior in the starting lineup, that work ethic remained with a relatively young group.

The reason? Love has always believed in building a team the right way and putting work behind it to help his team succeed. Whether they were a state championship contender or not, the expectation stayed the same.

“I’m most proud that we truly are a family,” Love said about his team’s historic season following a berth in the Final Four. “We’re such a talented group of kids, but this group is more than that, they’re an unbelievable group of kids in so many facets. This season wasn’t just because of who we had this year, it was also about the former players that gave so much to our program. Once you’re a part of our program, you’re a part of our family.” 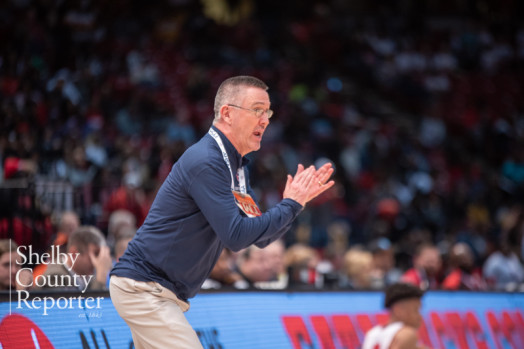 Throughout this season, you could see his coaching on display in an almost artistic manor.

Not only was he putting a very young team on the court, but he had to get by both Thompson and Hoover to start the postseason run—two of the state’s best teams.

While it was challenging at times, his team looked to play with a level of calmness and confidence. They didn’t seem scared of the big moments and actually seemed to thrive in them.

It was remarkable to watch his coaching from afar, as he led the Eagles to a historic run, which has earned him Shelby County’s Coach of the Year award for the 2019-20 season.

Up against strong candidates like Chris Laatsch at Spain Park, Greg Dickinson at Montevallo, John Hadder at Vincent and Joel Floyd at Pelham, it was a tough year to make the decision, but Love separated himself.

Laatsch led Spain Park to the Elite Eight and 20 wins in his second season after 12 total wins for the Jags in the last two seasons combined. Hadder led Vincent to a 26-3 overall record and a 2nd appearance in the Elite Eight in a row. Dickinson led the Bulldogs to a spot in the Elite Eight and a record of 25-7, including an 18-game win streak before losing in the quarterfinals. Floyd took a team that had to rely on just the five starters on the floor for most of the season, including the postseason, to the Sweet 16.

That was some stiff competition, and I’m never disappointed with any coach in the county, meaning it just takes impressing and being better than the best to earn coach of the year.

That’s exactly what Love did this season.

Yes, he had a lot of talent, but it was a young group of talent that needed a lot of coaching. Whether it be during a timeout or barking out orders to his team, he rarely sat down and always seemed to have a feel for every opponent and exactly what his team needed to do.

He got senior leader Zane Nelson to become one of the best leaders in school history, as well as fellow seniors Trey Sullivan and his son Luke Love. That helped set the stage for younger players like junior Noah Young, sophomores Wilder Evers, Will Shaver and Evan Smith, and many more that will be back.

Now the stage is set. This year’s coaching job from Love has shown what is possible and could change the program’s future with the amount of talent that is coming back and the skill of himself as a head coach.