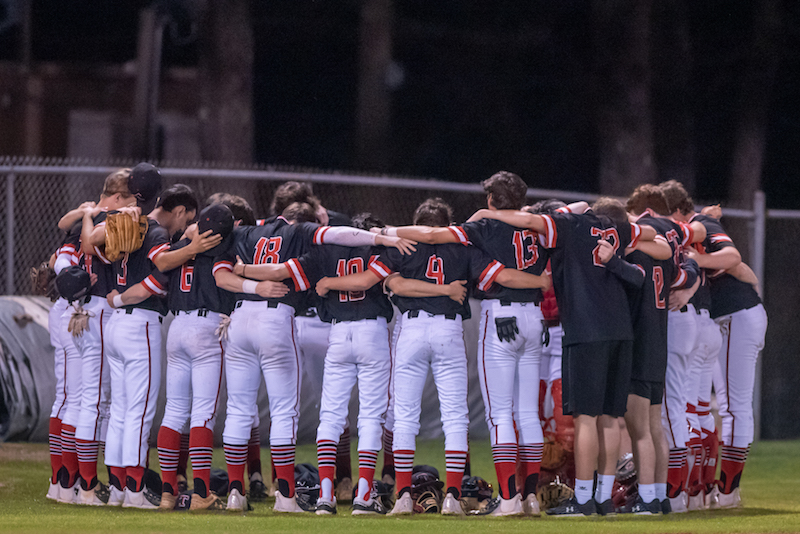 Thompson's baseball team split a doubleheader with Vestavia Hills on Friday, March 13, which became its last game until at least early April due to COVID-19. (Reporter photo/Keith McCoy)

VESTAVIA HILLS – In a lopsided night of baseball on Friday, March 13, the Thompson Warriors overcame a 13-3 loss to Vestavia Hills by responding with a 14-5 victory against the Rebels later in the night.

Following the loss, the Warriors fell behind again early to Vestavia Hills in the second game of the night after the Rebels scored a run in the bottom of the first to take a 1-0 lead.

But after two scoreless innings, Thompson’s bats finally woke up in the top of the third. The Warriors put the first two runners of the inning on base due to a catcher’s interference and a single.

Then, on what was meant to be a sacrifice bunt from Saxon Klinner, Connor Gregory was able to score Thompson’s first run of the game to even the score at 1-1.

That was just the start.

In the home half of the inning, the Rebels answered with a single and fielder’s choice that brought home two runs to bring them within a run through three innings of play.

The exciting stretch of offensive play carried into the top of the fourth when Thompson put together three straight two-out hits after two strikeouts started the inning. Klinner and Watts hit a single and double, respectively, before Hobbs came through again with another hard-hit ball to center field. This time it got down for a single and drove home both baserunners for a 6-3 lead.

Already in command, Thompson settled in defensively after that as well, before posting a big top of the sixth to put the game seemingly out of reach.

The Warriors got RBI singles from Watts and Trey Puckett in the inning, while Watts came home on an RBI groundout from Harrison Poplin. All of that pushed Thompson in front 9-3 through the top of the sixth.

Vestavia Hills added two more runs on back-to-back RBI singles to cut the deficit to 9-5 heading to the final inning, but the Warriors put the final stamp on the game in the top of the seventh. Following a lead-off walk from Gregory, Logan Braunschweig doubled to right field to drive home Thompson’s 10th run of the inning.

That was followed by two singles in a row from Klinner and Watts, the second of which brought home a run. Following a passed ball that allowed Klinner to score, Thompson put together three straight singles from Poplin, Puckett and Pearman to score the game’s final two runs.