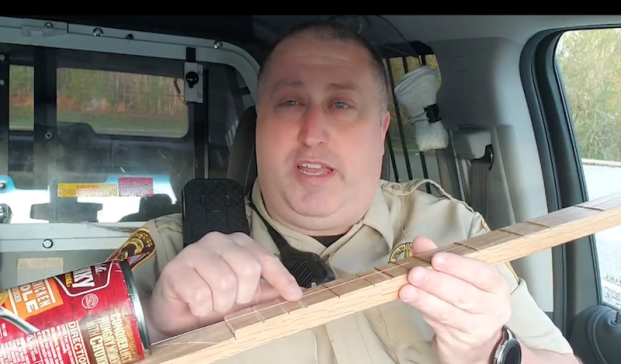 NORTH SHELBY – While a normal day for Oak Mountain Elementary School Resource Officer James Sellers typically includes protecting hundreds of kids inside the school by helping them have a fun and safe learning environment, things changed when COVID-19 (Coronavirus) halted the school year and forced kids to the confines of their own home.

That, however, didn’t stop Sellers from interacting with students of OMES on Tuesday, March 17, trying to help with some Saint Patrick’s Day fun in an activity that has now become a daily interactive experience for the kids.

Sitting from the driver’s seat of his patrol car rather than a classroom, Sellers had those watching join him for a reading of ‘How to Catch a Leprechaun.’

“The night before, I had a teacher friend that said I should do something like that,” Sellers said. “She challenged me to do it and I just figured why not. It’s good for the kids to see a familiar face.”

Sellers read each page, before turning to show the camera the page so the kids could see each page of the book as he read it. Then, after finishing the book, Sellers challenged any students watching to design a Leprechaun trap to have ready for next year’s Saint Patrick’s Day festivities.

“It’s important to keep them in routines and show that the world is still a good place,” Sellers said. “It’s not all doomsday, which they are hearing a lot of. To know people outside still care for them and are looking out for them is something we need to be doing.” 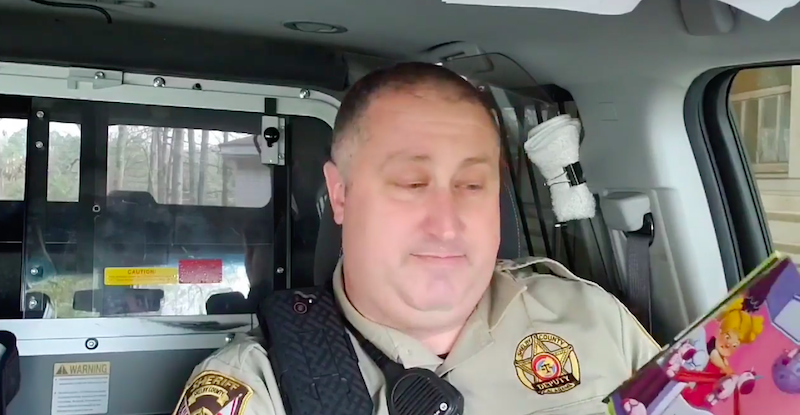 A day later, Sellers decided one day wasn’t enough, and on Wednesday, March 18, he didn’t read a book, he took his patrol car lessons to the next step with a music day.

This time, instead of flipping through a book, his fingers were busy strumming a handmade guitar that featured a piece of wood, a soup can and a guitar string known as the canjo, which replicates a simple verson of a banjo.

Sellers decided to play a tune for the kids watching to see if they could guess what it was, as he played the song ‘When the saints go marching in.’

“Since yesterday was reading, I decided today was going to be about music,” Sellers said. “So I played a song most everybody knows, ‘Saints go marching in,’ on my canjo.”

After playing his song for the kids, Sellers gave the students two separate challenges. First, he asked them to get creative and find items around the house they could use to make an instrument similar to his canjo, while then asking them to listen to different genres of music like classical, blues, jazz, rock and others that they may not normally listen to. He then asked them to talk with their parents about music they used to listen to when they were younger.

“It’s important to learn from everything you do,” Sellers said. “I believe I’m constantly learning as an adult. So adding thought behind what you’re doing instead of randomly doing it is important when learning a new activity.”

While it’s different for him to be sitting in front of a camera instead of a class full of students, he’s making the most of the opportunity.

“I’ve been in schools for six years. It’s a big change to be patrolling around by myself again,” Sellers said. “Normally I’m around a lot of people. It’s a little weird being in front of the camera, but for the kids I’ll do what it takes.”

He said he’s not sure how long he’ll keep doing these videos, but that he has a couple of ideas still lined up that people have shared with him including magic tricks, a guided drawing and maybe a P.E. lesson with other officers.

“I do magic tricks at the school, so I may do one of those, but I’m not a great artist, so that should be interesting,” he said.

Whenever a video is made, the Shelby County Sheriff’s office will now post them to their Facebook page.

While we don’t know if the canjo will make a return, we do know Sellers is making the most of his role as an SRO and deputy in Shelby County.