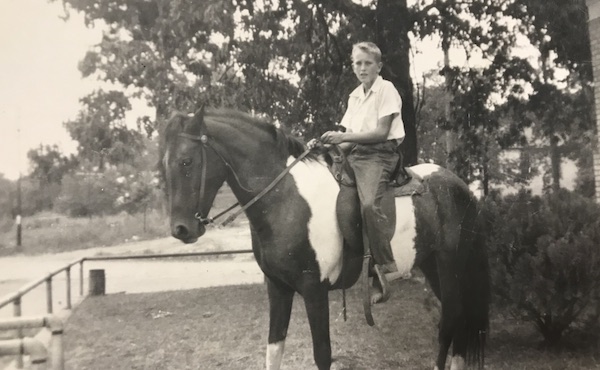 Jerry Davis, age 13, delivers mail by horse back circa 1951 in Shelby County. (Contributed)

There is a wealth of local historical knowledge among the volunteers that keep the Shelby Iron Works running, and one of those valued volunteers has personal history that goes back further than others.

Jerry Davis, 80, has been volunteering at the Iron Works since the historical society’s beginning.

His favorite story to tell goes back to when he was 6 years old and began helping his dad deliver mail in his 1945 jeep.

“We had a 33-mile route with 90 boxes,” he said, “And we went all over Shelby Shores and Spring Creek on old wagon roads.”
His most vivid memory of these years is how the county began paving the roads when he was in the eighth grade.

There was a two-mile section south of Shelby that his dad was unable to take the jeep on during the work.

To make the work go faster, Davis’s father, Cecil, put his 13-year-old son on a horse fitted with a Civil War saddle and saddlebags and sent him off to work the short section of the route that was an obstacle for his jeep, while he delivered the rest of the mail.

“I was probably the last real carrier of the pony express that summer,” Davis said, laughing. “It was probably 1951 or ’52.”

Part of his duties included taking the mail he collected over to the old 1876 post office that was next door to the historic Shelby Inn that tragically burned down last year. The tiny post office that still stands today was active until 1960, he said.

Davis tells stories of time far gone, when 10-year-old children would ride their bikes barefoot all the way from Shelby to Columbiana to spend the day or even ride the train to Sylacauga without an adult.

“If I could earn 25 cents working at my dad’s grocery, I had enough money to watch a movie and get some popcorn too,” he reminisced, “Or I could go all the way to Sylacauga on the train and have enough to buy comic books if I made 30 cents. We’d spend the day down there and be back by supper.”

Normally, you would find Jerry Davis and his friends volunteering on Tuesdays and Thursdays at the Iron Works, doing everything from clearing land to extend the park to telling stories just like these to the locals who visit, but due to the need for social distancing to keep these human treasures of local history safe during the COVID-19 virus outbreak, they’ll be taking an indefinite break.
As we push forward into the unknown that the next few months may have for us, places like the Shelby Iron Works will depend more on straight donations to keep things going.

If you have an interest in helping financially, you can reach out to Executive Director Jennifer Maier at jmaier483@gmail.com.

By SASHA JOHNS / Community Columnist Danica Connell has been an entrepreneur since she secured her first tutoring job in... read more