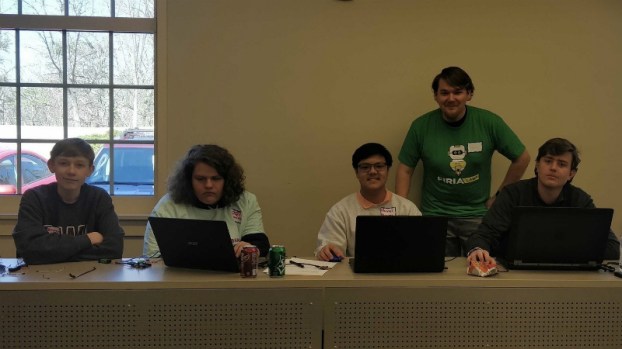 CHELSEA – Four Chelsea High School students developed an idea that could be an answer to school shootings—and earned the third-place prize at the annual TeenTech Bham Hackathon competition.

On Saturday, March 7, the group competed in the Hackathon competition hosted by Tech Birmingham at Samford University—their first time participating in such an event and with a limited knowledge of coding.

“We were one of the only teams that knew nothing,” Young said.

Fortunately, each team was paired with an expert in the field. The Chelsea team drew Chris Bero with Firia Labs.

Competitors from schools across the area were given a prompt at 8:30 a.m. focused on public safety.

“You have to come up with an idea to solve the prompt,” Vergara said.

Then, the teams have the rest of the day to develop an idea and build a program and model, and prepare a presentation.

The Chelsea team came up with “The Smart Lock Gun,” a device that can be fitted onto firearms to prevent mass shootings by engaging the safety when the gun enters a restricted area, such as a school.

Foster, Vergara, Wilder and Young worked through an offered lunch break, stopping only long enough to toss around a football outside to stretch their legs.

Vergara and Young focused on coding, while Foster worked on a three-dimensional model with a program called Autodesk Inventor and Wilder researched facts about shootings for the presentation.

A problem arose when their programming caused the device to continually lock and unlock while in the restricted area, instead of locking and staying locked.

“When we finally got it, we freaked out,” Wilder said.

At 6 p.m., teams had to stop their coding work and focus only on preparing the presentation.

Each student had to take part in the final presentation for a panel of judges.

“I just explained how it would work—how it would fit on the safety of the gun,” Foster said about his part.

The students would like to continue to develop their idea.

The device was programmed to only track the gun when it entered the restricted area—not all the time, which was important to the students.

Student of the Week: Madeline Epperson