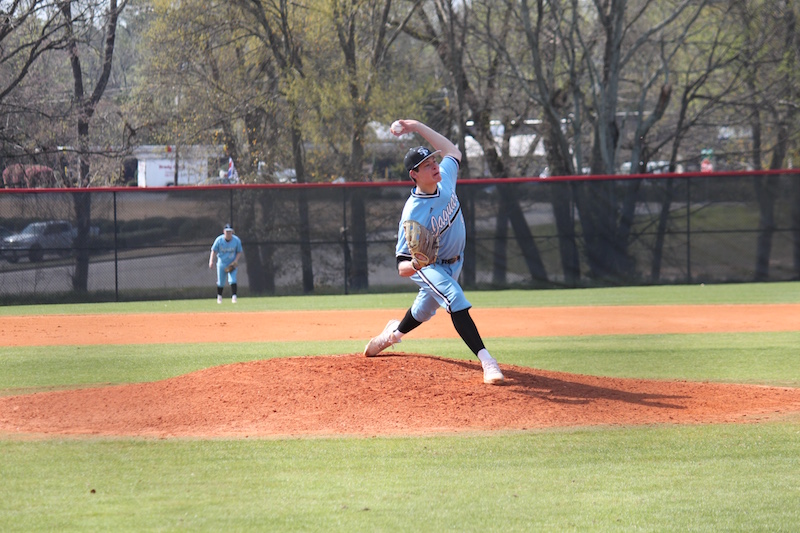 Spain Park senior Eli Mefford put together a strong start to the 2020 baseball season, which earned him an opportunity to continue playing in college. (Contributed)

HOOVER – Coming into the 2020 baseball season, Eli Mefford didn’t know what to expect. As a pitcher that was the third or fourth option in the rotation, he had no collegiate offers, and he didn’t know then, but his time to prove himself would be short lived due to the season being suspended following games on Saturday, March 14.

But in the less than a month he and the Spain Park Jaguars took the field before the suspension due to the novel coronavirus, Mefford shocked even himself by becoming one of the top pitchers on his team. In just a month of playing, he picked up three collegiate offers, and the week before the season came to a halt, Mefford committed to Southern Union College.

“I knew I had to step up this year if we were going to be successful,” Mefford said. “I started a workout program with (Godspeed Elite Sports Academy) and knew I would have to do extra stuff. I was out at least three times a week all summer doing long toss and other training exercises. It helped me improve a lot.”

His improvement was evident to head coach Will Smith, who trusted Mefford to go out and start the second of an opening-day doubleheader against the Chelsea Hornets on Saturday, Feb. 15.

“We are all very proud of Eli,” Smith said of Mefford. “He put in a ton of work in the offseason and improved so much from last year. His ceiling is extremely high.”

Taking on a Chelsea team that advanced to the Class 6A championship series the season before, Mefford went out and pitched the first two innings of the game allowing no hits and no runs with just two walks.

Spain Park went on to pick up the win by a final of 13-4, which was credited to Mefford. A big reason for that success early was his command of the strike zone throwing 18 of his 35 pitches for strikes.

“Last year, it was hard for me to consistently throw strikes,” he said. “I just felt my way through it. Now, being able to locate the fastball in the zone consistently and mixing up the off speed has built my confidence and helped me out this year.”

But just pitching two innings against Chelsea, it was actually a little more than a week later on Saturday, Feb. 29, against Hueytown that Mefford’s season took off, as did Spain Park’s.

Coming into the game with losses in three of four games and a 4-3 overall record, Mefford took the mound and was flawless. He pitched six innings of scoreless baseball allowing just three hits and two walks with four strikeouts. He exited with a 3-0 lead at the end of the sixth, and the Jags went on to win 5-3.

“That’s when I hit a rhythm,” Mefford said. “Six innings with no earned runs and three hits. It boosted my confidence a lot. I shocked myself honestly. I didn’t expect to do that good, but I build off of that moving forward.”

That was part of a stretch where the Jags won 10 of 11 games, including eight in a row before the season was suspended.

Mefford went on to finish the first leg of the season with a 5-1 overall record and a 1.5 ERA, which was a major shift from his junior year. He was expected to be one of the top pitchers in area play this season, but the Jags may not get that chance anymore with the season up in the air and postponed until at least April 6.

“I’m always trying to be the best person I can be,” Mefford said. “Junior year, I wouldn’t pitch in any big games. They’d just roll me out there if the top two or three guys couldn’t go. My expectation throughout the summer and leading up to this season was to be the best pitcher I could be. I knew I had to work harder than I ever had before.”

And that’s what Mefford did. While his season has possibly been cut in half, he earned college offers from Lawson State and Shelton State, as well as one from Southern Union the week before the season shut down. Then, on Sunday, March 22, he officially committed to Southern Union.

“Based off the past, I didn’t think I would have that opportunity,” Mefford said. “I Didn’t think I’d improve that much. I really shocked myself. I’m very grateful for it. It proves that all hard work pays off. It’s a great opportunity to have.”

While it’s an exciting opportunity and he’s proud that he capitalized on the brief time he got to showcase his talent this year, he’s also coping with the sudden end to his senior season and misses his team.

“It’s been tough. Very tough,” Mefford said of the shutdown. “Especially coming off an eight-game win streak. We were No. 4 in the 7A rankings and felt this was the team that could make the playoffs again and make a deep run at state. It’s tough to realize we might not play again.”

He and Spain Park shortstop Carter Sidor, who is also committed to Southern Union, have both been doing their part to stay in shape though.

“He has a gym in his basement, so we’ve been working out there and then taking advantage of any open fields by doing some long toss and other drills. We’re doing that just about every day,” Mefford said.

If the season has come to an end, Mefford said it would be disappointing because the team started to click and figure out what it would take to be a championship team.

But, he added that if the team’s season ends on an eight-game win streak with the Jaguars as the No. 4 team, he can at least be proud of the positive end they had.

Should the Jags suit up again, Mefford and his teammates will be hoping to win the team’s first championship since 2014.

Oak Mountain’s season halted as No. 1 team in…