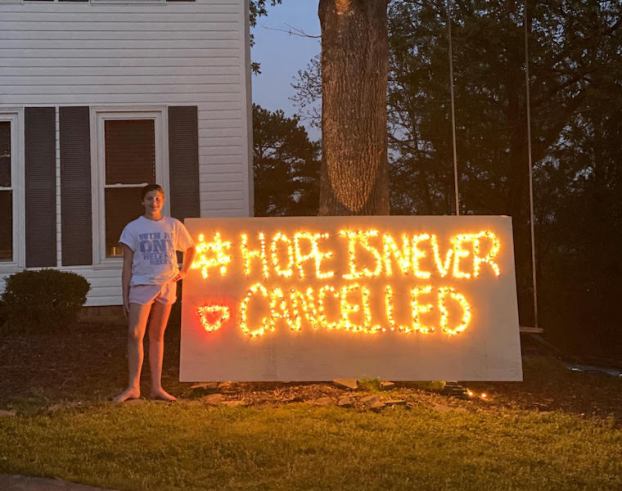 Baileigh Rumage, a local 12-year-old, wanted to spread some positivity when she worked on putting up a sign displaying the words “Hope is never canceled.” (Contributed)

HELENA – In the wake of the COVID-19 outbreak the response has been a wave of closures and cancellations, however, one Helena resident wants the community to know that “Hope is Never Cancelled.”

Baileigh Rumage, 12, plagued by the misfortune of being an extrovert in an environment shut down for public safety decided to learn a new skill by making and displaying an elaborate sign reading ‘#HopeIsNeverCancelled.’

One night Rumage asked her parents if she could use a drill and some Christmas lights, which led to her father teaching her how to use the drill and creating her sign.

“I put it outside so everyone can see it because I think that’s what people need to know right now,” Rumage said. “Even though things are bad right now and we’re stuck at home, it’ll pass and you’ve gotta have hope that better days are ahead.” 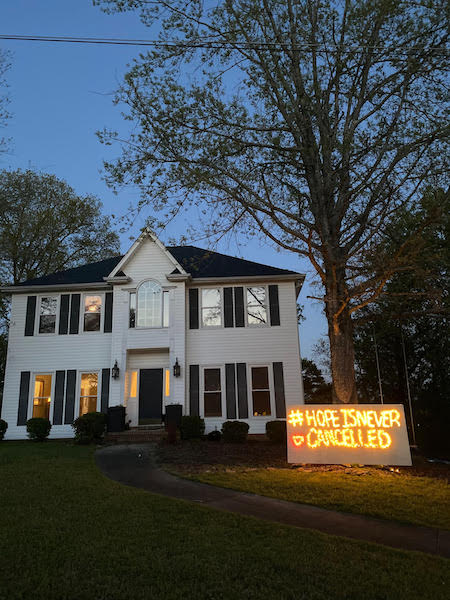 Baileigh found her inspiration from a slogan created by childhood cancer non-profit organization Smile-A-Mile, where her mother is the Development Director.

“A lot of people focus on the dark part of childhood cancer, but what we do is focus on the small moments of hope and good things that can be found on the way,” Shannon said. “This is a difficult time, now that there are no visitors allowed it makes it tough to continue getting that program in.”

The message was started by Smile-A-Mile CEO Bruce Hooper due to a challenging time that is being faced by so many across the world.

“(He) came up with the slogan during a business meeting on how to overcome the challenges we are facing during this time,” she said. “Bailiegh really liked it and decided to use it for a broader purpose.”

Since the sign went up the night of March 26, Baileigh has already received feedback from friends and neighbors on social media saying how much they liked or connected with it.

By NATHAN HOWELL | Special to the Reporter Helena – The It’s About Time Urgent Care in Helena is now... read more