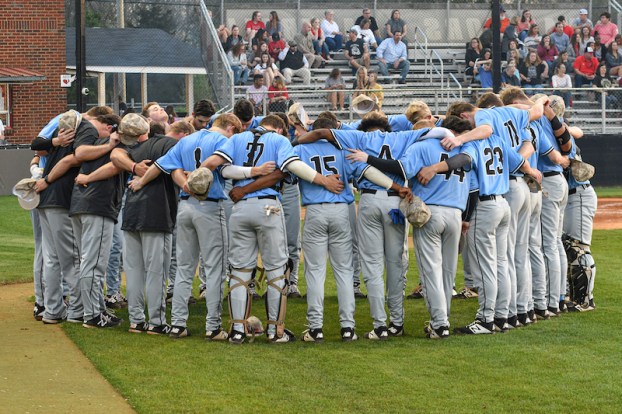 Helena's baseball team prays during a game against Thompson this season before the year was ended due to COVID-19. (For the Reporter/Jeremy Raines)

COLUMN: Sports may be canceled, but their lessons prepared us

It took a few days for me to find the words, to process it all—the spring sports season has ended… almost two months early.

Those warm spring nights under the lights we were just starting to see a little more than a month into the season have now been ripped away. There will be no more first pitches, no more goals scored, no more birdies, no more aces and no more crossing the finish line for the 2020 season.

For those that worked all offseason to have a breakthrough year and were on the verge of accomplishing just that, for those who were prepared for one last ride as a senior and for those looking to gain recruiting exposure; it’s gone.

But out of sorrow comes strength.

Believe it or not, this is something that was going to happen no matter what. It was something meant to test the world and on a smaller scale, this year’s group of athletes.

While I am as sorry as I can be that all of the seniors won’t be able to put on their uniform one final time, this is a chance to show what each sport has taught us—overcoming adversity.

We hear all the time about how sports are more than just competing. They are a means of learning and sharing messages.

At first, it took me a while to find the words. Like many of you, I was hurt. My original response was anger and disappointment. But then, I started to realize, this virus doesn’t define us and it doesn’t define this year’s senior class or any other athletes.

What defines us is how we respond.

For the county, it was shaping up to be a historic spring with five soccer teams, two baseball teams and one softball team ranked No. 1 in their respective standings, while several other were playoff and state championship contenders as well, including sports like golf and tennis.

Right now, I think we are all emotionally and mentally drained. Like facing a deficit in any game where we aren’t having success, we have to somehow completely flip the script.

Like being down 3-0 with two outs in the bottom of the final inning with the bases loaded, we need a walk-off grand slam. Like being tied in the state championship soccer game with the final seconds ticking off, we need a 40-yard game-winner as time expires like the one Morgan White nailed a year ago.

Seniors, go out and conquer your next step of life with confidence. If you can get through this, you can get through any challenge that stands in your way. No matter what will be ripped away from you in the future, you will be stronger because of this moment.

Younger athletes, this is the ultimate driving force. Once next year rolls around, don’t forget this moment. Don’t take for granted the precious time you get with your coaches and teammates, who you only get to battle with for a certain period of your life. Once you step onto the playing surface next year, no matter the sport, fight harder than you ever have and let your true passion for the sport you love pour out of you.

If sports have done anything in our lives, its prepare us for this moment. They have proven that anyone and anything can be defeated on any given day. Now use that to come out stronger on the other side.