‘This won’t define us’: Two sports gone in the blink of an eye 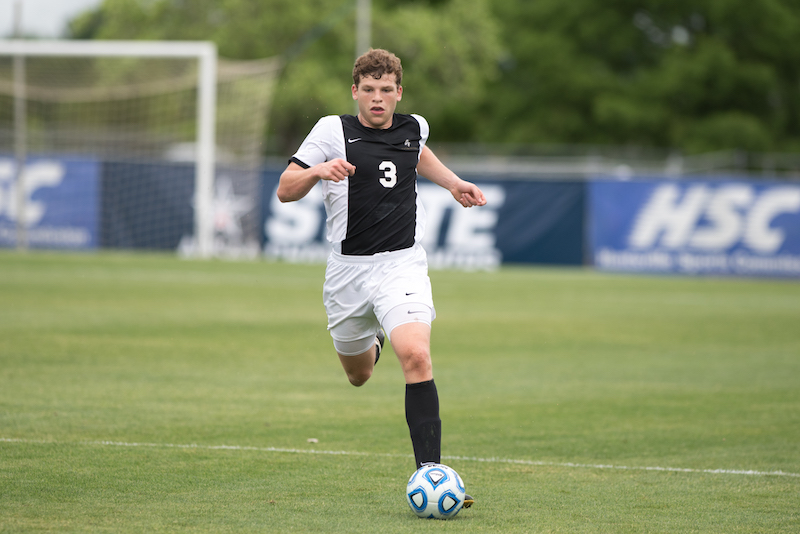 Westminster at Oak Mountain’s John Richardson, above, was a senior leader for the Knights this season looking to make a trip back to the Final Four before the season was cut short due to COVID-19. (Reporter photo/Keith McCoy)

NORTH SHELBY – He worked all year for this moment. To have one final chance to claim a state championship in two separate sports. As part of a No. 1 ranked boys soccer team and coming off a top-11 finish in last year’s track-and-field championship, his chances were high in both sports. Now, those chances have been ripped away.

But for Westminster at Oak Mountain senior John Richardson, the lost opportunity isn’t his main focus despite his final season with the Knights officially being cut short by close to two months.

“The class of 2020 and seniors that are a part of it should take it in stride,” Richardson said. “As leaders, we have to inspire hope for others.”

Richardson said there are two reasons he has hope despite the far-too-short season.

The first, he gets the opportunity to be at home with his family. While others in our history have had to fight in wars and leave home, he gets to spend more time quarantined with his family before leaving to start a new life in college and eventually finding a job in the real world.

The second, he says, is that his joy doesn’t come from this world. His joy comes from the rock of his salvation. He said refocusing on that helps realize that we can’t take for granted what we love most.

“I have faith that this won’t define the class of 2020,” Richardson said. “It’s a new challenge to face. We’re going to rise to it. We’re a class of champions, leaders and teammates. Though we think senior year is defined in big moments, that’s not what it’s about. Our class was defined in little moments that happened this year. Defined in class and encouragement. This is our legacy. A legacy of limitless love.”

While Richardson is focusing on the positive, he also knows that everyone will and must mourn the way this season played out due to the unnatural circumstances.

“There should be a level of lament. We expected last part of senior year to be bright light and have memories. Walking off on senior night shaking hands, hugging coaches, hugging parents. We have every right to mourn those memories, but we cannot let it get us down.”

For Richardson and his Westminster teammates, they were coming off a state championship two seasons ago, but a loss in the Final Four last year by one goal to the eventual state champion.

That set them on a path to redemption this year with much of their talent back and the No. 1 ranking through the first month of the season.

“We lost some quality players, but just as any team does, we replaced them. Guys really stepped up into their role and learned,” Richardson said. “I felt we would give a heck of a fight for the trophy. It’s hard to beat a team when you’re playing 11 v 11 and your team is playing as one.”

But according to Richardson, the season wasn’t about winning a championship. While that was obviously a goal, changing the culture is something this year’s senior class was focused on and that’s something he feels like they accomplished.

“From the start of the season, the seniors met and had two goals. We wanted to develop a culture of kindness, not a blaming culture. Every word needed to be from love and to help the team. The second goal was for our success to be a byproduct of that culture change.”

Richardson said that if that culture they established early this year carries over with next year’s senior class, which will trickle down to the freshmen, sophomores and juniors, then this year was a success no matter how long it lasted and despite not getting the chance to chase down a title.

Despite the season being cut short and the portion of the season the Knights got to play together also facing the turmoil of rain canceling games, there was one final chance for the team to get together.

Richardson said as soon as the NBA decided to shut down, they expected a trickle effect and for their season to be cut short as well.

But that decision for the NBA was made on Wednesday, while Alabama didn’t make the decision on spring sports until Friday, which gave Westminster two more days of practice.

“I delighted in them,” Richardson said of those final two days. “We had an absolute blast. We just took advantage of it and loved each other through the game. We played different games that were competitive and did different drills, drills that were fun. We found a way to enjoy the little things. Though sad, the memories of those practices I will be OK walking away with.”

As he prepares to either move on to the University of Alabama or West Point, Richardson hopes he and his fellow senior teammates have left behind a legacy and a change of culture that won’t soon be forgotten.

He said when they come back in a few years, they hope to see echoes of what was started during their shortened senior season.

In particular, he hopes they see how this year’s senior class handled this year’s heart break and use that moving forward.

“We’re the first to deal with something like this, but there are others that dealt with much worse,” he said. “We won’t be a forgotten class. Guys next year will look back at how we handled this. We’re walking away from what we love with questions, but they’ll take note and that’s what matters.”