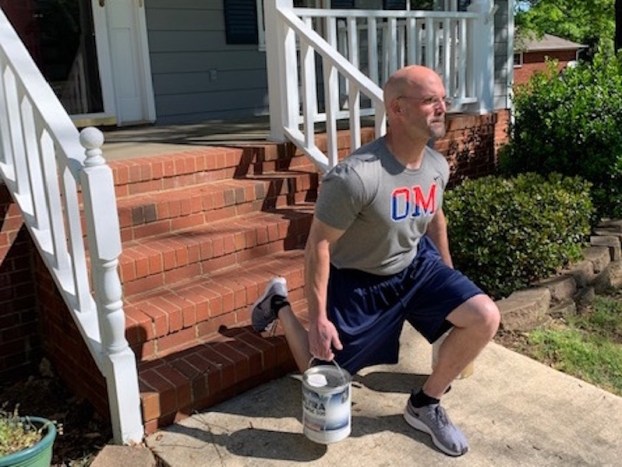 NORTH SHELBY – Holding a pair of paint cans, one in each hand, Steward Carlisle lunges off the front steps of his home down his walkway where he transitions into reverse dumbbell flyes.

This is all a part of an at-home workout for the Oak Mountain Strength and Conditioning Coach, but it’s not just for his benefit. Trading in gym gear for lawn equipment, paint cans and other at-home items, Carlisle videos himself and shares the workouts to Twitter all for the athletes at Oak Mountain to use amid the COVID-19 outbreak, which is keeping them from working out together until at least early June.

“To begin with, we really didn’t know how long this was going to last. I just thought it would be cool to put things on Twitter and show that it doesn’t have to be a barbell, a dumbbell or anything,” Carlisle said. “I think now it’s become about the kids getting in a routine. Normally they have a routine during the school day. When things become uncertain, you just worry about them getting out of that routine.”

Starting each workout with stretching, he proceeds to share a message about the day’s work out before transitioning into videos of himself performing different exercises.

Carlisle has used items such as a downspout splash block, a cooler, cardboard boxes, a toolbox, bags of potting soil and fertilizer, paint cans, deck chairs and even his own house to replace weights. He’s done exercises ranging from conditioning and soft tissue type training such as sprints and running to weight training like lunges, deadlifts, squats, pull ups and others.

As a member of the National High School Strength Coaches Association and the 2020 Alabama State Strength Coach of the Year, Carlisle has talked with strength coaches from other states through webinars and was able to incorporate a lot of different ideas.

For Carlisle and Oak Mountain head coach Cris Bell, the spring of 2020 has created a new experience with sports being completely shut down due to the novel coronavirus.

“Knowing what the decision was last Thursday was huge,” Bell said. “I hated it, but it was good to know what was happening instead of wondering. For me and the football coaches, knowing helps us set up a plan.”

With that, the coaching staff was able to set up a plan for the football players moving forward.

While they can’t be around each other in person, which hurts in multiple facets of the game, the coaching staff has started reaching out to players to start working on team bonding and trying to find a way to start preparing for the upcoming 2020 season currently set to start in August.

“Moving forward, we want coaches in touch with players through Zoom or FaceTime, whatever they are comfortable with, just to stay in touch and do life with them as much as we can under the parameters that we are in,” Bell said.

That is something Carlisle said will help the mentality of the kids as well. While he wants them staying in shape, he knows right now they need to lift each other up amid all of the uncertainty.

“I saw a great webinar about how to stay positive and create virtual meeting rooms with the student athletes to help with virtual team-building activities to get to know each other better and bond,” Carlisle said. “That will help them. They’re used to seeing each other every day, and now, they’re having to stay in houses, in their yard in their neighborhood. They don’t get to see their teammates. Getting to see each other is a huge bonding experience right now.”

Ideally, Bell, Carlisle and the rest of the coaching staff are hoping that by keeping in touch with the players, they’ll be able to help give them some guidance on ways to stay and shape and be ready when it’s time to answer the call.

Bell said being more proactive in communicating and helping the players have some set goals and meetings will help the coaches start to get some feedback on how they are handling everything.

But Bell and Carlisle know that circumstances are different right now.

“Ideally, you’d have a kid that is 100 percent committed, an at home gym and other things to make the situation perfect, but that’s not reality,” Carlisle said. “There are different factors for everyone and right now we need to be focused on them being mentally strong.”

“It’s one of those things where there are things probably more important than season prep, but life will return back to normal and it will be business as usual,” Bell said.

As a coach since 1989, Bell has coached through the Gulf War, 9-11 and was a coach in Virginia during the D.C. sniper attacks a year after 9-11, but he said things returned to normal after those events, and they’ll return to normal after this.

He did say that he had never seen things completely shut down like this, but that when it does get back to normal, his players will need to be ready to go.

“We’re going to find out what this team is made of. You’ve got some that will do the right thing and handle themselves well. They’ll be ready to go,” Bell said. “And we’ve got some where this is a gut check. It’s a different type of gut check, but it will reveal who you can count on.”

But when the players are finally allowed back in a group setting and Carlisle transitions from online videos to training his players to prepare for a full season of games, that’s when the true test will start.

“When we have them back, they’re back basically back in our base program,” he said. “We’ll be reintroducing them, do no harm and try to build them back up again.”

If they’re allowed to get back together in early June that would mark three months since they were all together as a team and without proper football training if they haven’t been doing workouts and conditioning at home.

“We have to be able to build them back up,” Carlisle said. “We’ll be at the bottom of progress. It normally takes 6-8 weeks to build up conditioning. If we come back in early June, we’ll be pushing being ready for the start of the season with the fourth of July in there as well.”

He added that one of the most important aspects for him and the coaching staff will be not pushing them too hard right away with the fear of injury. Building up the soft tissue with lateral and football game movements will be one of the biggest keys in addition to conditioning and training so the players don’t risk injuries.

But right now, Bell and Carlisle both were happy to see things more like they used to be.

For the time being, it’s about the athletes finding creative ways to exercise and condition, while also trying to have fun away from constant football training.

Bell also said he thinks this will help light a fire under his guys because they now know what it’s like to have the game taken away from them.

“Normally, when it’s done, it’s done. Now these kids get to see what it’s really like when it all comes to an end and they’re done. Now they’ll think about all the difficult work away from playing the game and wonder, does it really suck? Those are some of the best bonding moments and I think they’re seeing that.”

While it’s unknown when they’ll get back together as a team, Bell can only think about that day with excitement. “It’s going to be so good to see them,” he said.

By SETH HAGAN | Special to the Reporter Coaches across the country are having to game plan for an extra... read more