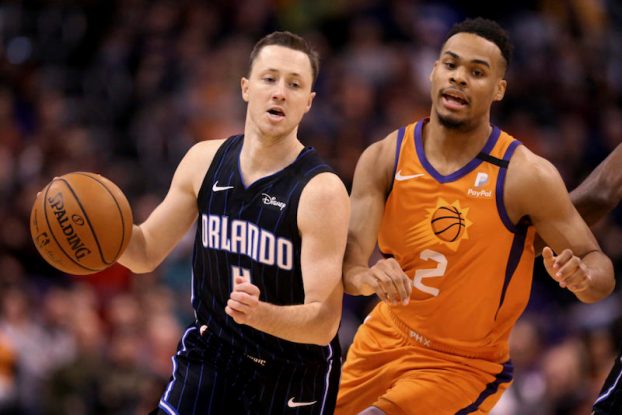 Orlando Magic's Josh Magette (4) drives to the basket around Phoenix Suns' Elie Okobo(2) during the first half of an NBA basketball game Friday, Jan. 10, 2020, in Phoenix. (AP Photo/Darryl Webb)

Former Spain Park standout and current NBA two-way player Josh Magette was named an inductee into 2020 Gulf South Conference Hall of Fame after a stellar collegiate basketball career with the University of Alabama-Huntsville.

Magette was a three-time all-conference selection and the GSC Co-Player of the Year in 2012, the same year he led the Chargers to their first conference title in program history.

Magette was a two-time All-American and guided UAH to back-to-back Elite Eights, earning Most Outstanding Player honors in the South Regional each time.

“With a long and storied history that includes 53 National Championships, the GSC and its member institutions are proud of the Hall of Fame introduced in June 2014 that recognize individuals who played a key role in developing the conference’s reputation and legacy,” said GSC Commissioner Matt Wilson. “The Class of 2020 almost perfectly represents that history with achievements spanning every decade of our history.”

In total, Magette finished his four-year tenure with 1,465 points on 480 field goals – numbers that both rank eighth at UAH – while totaling 604 rebounds to rank seventh among Chargers.

He remains the GSC’s career leader in assists and steals. Magette continues to play professionally, making his NBA debut in 2017 with the Atlanta Hawks, and most recently on a two-way contract with the Lakeland Magic in the NBA G-League and the Orlando Magic in the NBA.

During the 2019-20 season, Magette was averaging a double-double in the G-League behind 21.1 points per game and an unbelievable 10.6 assists per game, while also averaging 4.1 rebounds per game.

Not only is his assist number the highest in the league by almost two complete assists, but he is also 13th in the league in scoring with his 21.1 points per game.

So far this season, Magette has played in 29 games in the G-League, starting 28 of them, while averaging 35 minutes per game. In his G-League career, Magette has averaged 14.2 points, 9.1 assists and four rebounds per game.

In the NBA, he only got 4.7 minutes per game this season and averaged 1.5 points in that span with 0.6 assists, playing in eight games.

At Spain Park, like most other places he’s been, Magette is the school’s all-time leader in assists and led the Jags to their first Final Four in school history.