Since Gov. Kay Ivey issued a stay-at-home order on the afternoon of Friday, April 3, the Alabama Department of Public Health has made more numbers available to the public.

Right now, Shelby County has administered 646 tests with 120 confirmed cases, meaning 18.6 percent of those tested end up with a confirmed case, while 81.4 don’t. The county also has four confirmed deaths of the illness, which are all that have currently been reported to the ADPH. The latest numbers were as of 12:15 p.m. on Saturday, April 4.

Statewide, there are now 1,550 confirmed cases of the virus with 10,829 tests administered. In addition to that, there are 41 reported deaths, 26 of which are confirmed, while the ADPH is reporting 212 hospitalizations.

So far, there are no recovery numbers available.

The 26 confirmed deaths have come from 13 different counties, including Chambers, Etowah, Jackson, Lauderdale, Lee, Madison, Marion, Mobile, Montgomery, Randolph, Shelby, Tallapoosa and Washington. Chambers and Mobile have had the most confirmed deaths with five each, while Shelby is just behind with four.

A total of five counties now have 100 or more confirmed cases, while nine counties now have 40 or more. Other distinct numbers include 83 from Chambers County, 61 from Montgomery County, 49 from Walker County and 41 from Tuscaloosa County.

Other counties listed as having one confirmed case of COVID-19 include Barbour, Butler, Conecuh, Crenshaw, Dale, Fayette and Lamar.

This latest update featured 65 of Alabama’s 67 counties with at least one confirmed case. 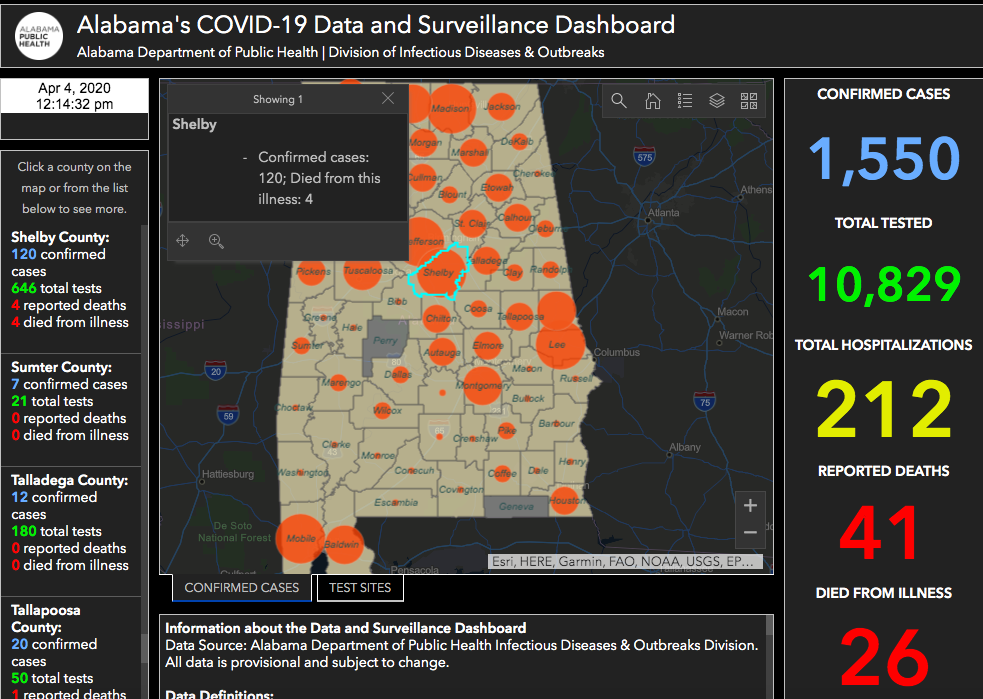