With the exception of the time he served in the military, Owen Booth has not ventured much from his birth place of Pearidge, Alabama.

The sixth of nine children, he attended elementary school in a building that no longer stands just a stone’s throw from his residence on Highway 10. 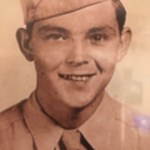 He enlisted in the United States Army at age 18.

As a World War II veteran, he was able to travel Europe extensively.

“I had good times and some bad times,” he said of his military span. “I liked payday and chow the most.

“I got to see the Leaning Tower of Pisa,” he added.

Owen married Pearidge native Eleanor Ruth in 1949. They had grown up together.

Ruth relished her role as a stay-at-home mom of their two sons and daughter.

They worked together to build the residence Owen has called “home” for the past 60 years.

In 2014, the couple were presented with the State of Alabama Senior Citizens Hall of Fame recognition plaque acknowledging their sixty-five-year marriage.

“I liked everything about being married,” Owen said, smiling.

The couple’s 68-year marriage ended when Ruth passed in 2017.

Owen was an employee of Concord Coal Mine for 30 years, in which he spent seven days a week underground operating the mine’s locomotive.

Although he doesn’t do so a lot, he does routinely get out and about; driving himself to

appointments, eating out at a restaurant, or to one of his favorite pastimes, visiting with his

Although his wife became a member many years before him, Owen too, has been a long-time member, and his 20-year involvement at the center created many good memories as well as friendships. He recalls their nursing home visits and his volunteer work with Meals on Wheels.

Over the years, members have aged creating attendance issues and others, like Ruth, regrettably have passed on.

However, the entourage still gathers twice a month for fellowship, good singing and good food.

At 95, Owen exercises at the gym at least once a week, sometimes more.

His hobby of camping is no longer possible, but he enjoys a good game of horseshoes and music, especially that of his favorite singer, Hank Williams.

By SASHA JOHNS / Community Columnist The Shelby County Arts Council is learning to adapt in the face of shutting... read more