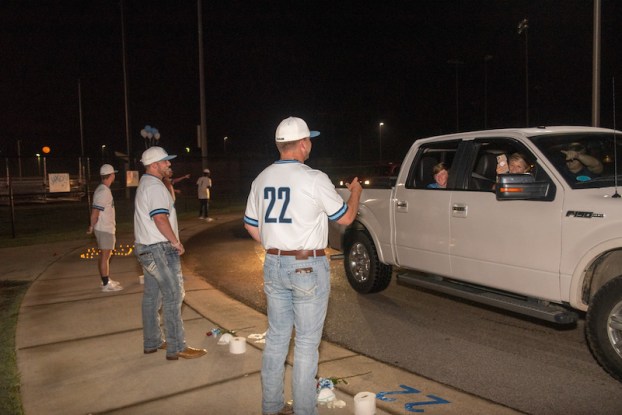 CALERA – Two months ago, seniors stepped onto the field for the first time this season ready for one last ride with their teammates not knowing what was ahead.

Just a month into their final season, everything came to a screeching halt due to the spread of COVID-19, which shut down schools and spring sports for the remainder of the 2019-20 school calendar year.

But that didn’t stop the celebration.

While a lineup change was made to the original plan, the Calera Eagles still hosted senior night on its scheduled date of Wednesday, April 8.

At 8:20 p.m., also 20:20 military time, the lights to the baseball field were turned on and cars filled the parking lot to participate in a drive-by celebration to honor Calera’s 2020 seniors one last time.

“We turned lights on at 8:20 and left them on for 20 minutes. It was a final salute to those guys and the extreme circumstances that ended their season,” first-year head coach Chris Wilson said. “We’re not able to meet, have a banquet or have a formal finale to season. This was a good way to thank them for the season.”

The stood just outside of the baseball field for 20 minutes, to match the 2020 theme, as cars filled with family, teammates and friends rolled by honking their horns and waving in celebration.

“It was good to be out there with the seniors one last time,” Butterworth said. “It’s been a good four years with them. Given the circumstances, we couldn’t have asked for a better senior night. All of the hard work the last several years was all worth it to see the community support.”

After moving in from Montevallo his freshman season, making the jump up two classifications, Butterworth was a contributor on the team each of his four years at Calera. And during his senior season, he was the team’s top pitcher, as well as a strong presence at the plate.

“Calera accepted me and it led to the best four years I could have asked for,” he said.

Butterworth did say it was rough not getting to finish the season because of the high hopes the Eagles had under their first-year head coach.

“We didn’t do great last year, but had a new coach this year and bought in,” he said. “We got off to a good start and beat a couple of good 7A teams. That made it rough not getting to finish the season.”

Despite the season coming to a premature end, Butterworth will get to continue playing alongside two of his Calera teammates at the next level, as he’ll join both Graham and Mason Blankenship at Lawson State to play collegiately.

“We’ve played together since we were nine years old,” Butterworth said. “It’s going to be fun to go to college and play with them.”

In their time at Calera, the twins have created many special memories playing the game they love together, and they got to share the stage one final time as the seniors were honored.

“It was such a special and emotional night to see the lights on again and see the community come out and support us,” Graham Blankenship said. “The last few years have meant everything. A lot of people don’t get to experience playing with their sibling. We pick each other up. It’s hard to beat that feeling that you have your sibling next to you.”

Mason reiterated that point, adding that “The Calera community is special. It’s just home to us.”

Coming into the season, after a tough go during the 2019 season, the five seniors came together to set goals for the year and rally around their third coach in three years.

“Coach Wilson is a heck of a coach,” Mason Blankenship said. “He drilled it in our brains that no matter what, we were going to win. It was a different mentality than last year.”

While this year’s group of five seniors only got a sample size of what it was like under Wilson, they all have confidence that he is going to turn the program around.

“I came into a good situation with these guys,” Wilson said. “All five of the seniors are some of the best kids I’ve ever been around as far as character and leadership. Sometimes you come into a situation the first year with seniors and it doesn’t work, but that didn’t happen with this group.”

A big reason for that was also the help of the other two seniors in Alijah Franklin and Dylan Killingsworth.

Killingsworth is a player that Wilson had to convince to play this year. As a key football player for Calera, that had always been his focus, but he’s also a natural leader, which is why Wilson wanted to see him on the team.

“Dylan brought toughness,” Wilson said. “He squashed any excuses guys were making. He’s so mentally tough and a great athlete. I just wanted him out there.”

His senior teammates were in agreeance, praising his presence in the dugout and as a team leader this year.

“Last year, we didn’t have guys keeping us up,” Butterworth said. “Dylan Killingsworth was a big addition to the team. He was that guy that kept us all up this year.”

For all five seniors, this year didn’t come to the end they had hoped for, but in a short period of time, they set the stage for the future and bought into a new coach.

And for a brief moment on Wednesday night, April 8, they were honored one last time for what they had done despite difficult circumstances.

By SCOTT MIMS / Staff Writer A Calera grocery store is utilizing an innovative piece of equipment made by another... read more