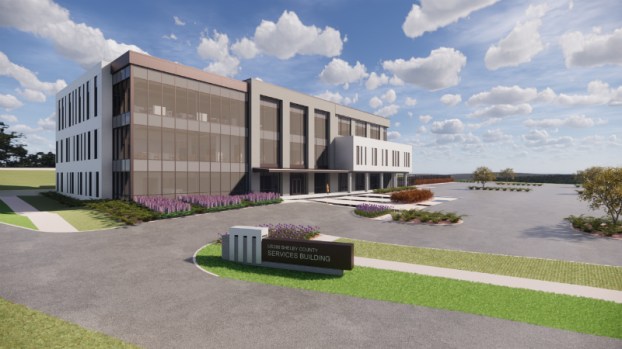 A new county services center will be built off U.S. 280. (CONTRIBUTED)

COLUMBIANA – Construction of a new Shelby County services center off U.S. 280 could begin later this month as a $12.2 million bid was approved Monday, April 13, by the Shelby County Commission.

Clements Dean Building Co. LLC submitted the lowest of five bids, at $12,229,000, with the highest bid coming in at just over $13 million.

“For a project this size, that is a very, very competitive, very good bid,” Shelby County Manager Chad Scroggins said.

The project will be paid for out of fund balance reserves.

Shelby County’s secure funding for the project, along with general uncertainty in the construction industry during the COVID-19 pandemic, resulted in bids favorable for the county and even below estimates, Scroggins said and added that the same project two months ago might have cost an additional $1 million.

Shelby County 911 Communications will be based out of the new building and contribute about $2.5 million toward the project based on the square footage the organization will occupy.

So, the county’s part of the project will be about $9.7 million.

Groundbreaking could occur by the end of April, Scroggins said, and construction should take about 14 months, which would mean the center could be completed by the summer of 2021.

Scroggins thanked the various county staff members who contributed input and feedback about plans for the center.

“It’s probably been the most reviewed set of plans ahead of time that we’ve ever done,” he said.

The facility’s 4,700 square feet will be split among three levels. The new building will take up a portion of the footprint of the former building that most recently housed Blackwatch Sports Performance.

The remainder of the space at the site will be used for parking, which will also benefit the adjacent SportsBlast 1996 soccer fields.

On the bottom level will be new offices for the Shelby County Water Services, which was formerly located in Westover.

Also, the Shelby County License Office formerly located in Inverness Corners will be relocated to the new center.

Both those offices formerly operated out of leased space. The current leases will be up in 2021, Scroggins said, so officials planned construction of the new center to avoid renewal of the leases.

A new addition to the U.S. 280 corridor in Shelby County will be the driver license test office. The county currently has two such offices: in Columbiana and Pelham.

A large multipurpose room will be located on the first floor. This will house polls during elections but can serve various other purposes, including large meetings.

A point of contact for a new Shelby County Sheriff’s Office substation will also be located on the bottom floor of the facility.

The second floor, which is dedicated to the Sheriff’s Office and Shelby County 911, will be a secured space, both with restricted access but also with building materials able to withstand strong storms to keep the county’s critical services operational in the event of a natural disaster.

The 911 center will move from its current home at the county facility in Pelham.

The third floor will provide a new home for Central Alabama Wellness, meeting space for economic development entity 58 INC. and room for future growth as additional needs are determined.