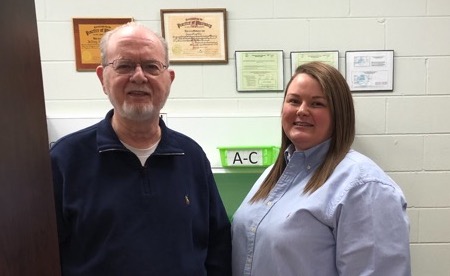 Double A Drugs LLC will soon be the newest business on the main downtown thoroughfare in Vincent. The Food Outlet located of Alabama 25 has invited this new pharmacy to make its home inside the store with a scheduled opening day set for April 13.

While the business is new, residents in Vincent will find one of the faces in this new establishment to be friendly and familiar. Ansley Peters, who since 2016 worked for The Medicine Chest in Vincent, is soon to be in business with her Uncle Amon.

The Medicine Chest served as a landmark in Vincent for years. Ansley started working there a few months after Mr. Jim Ehl decided to retire and sold to a store out of Tupelo, Mississippi. In November of 2019 that company closed the store leaving Ansley, Somer Wallis and pharmacist Keith Hobbs out of a job.

“When I found out that the Medicine Chest was closing, I called my Uncle Amon that day,” said Ansley. “I tried to talk Amon and Keith into going in together and opening their own store, but it fell through,” she added.

Amon Peters is Ansley’s father’s oldest brother. She explained that there is a 16-year difference between her uncle and her father so, “Amon is more like a grandfather that an uncle,” said Ansley.

Amon is a Mercer graduate and has experience working in several pharmacies including the one he opened in 1985 in Atlanta, Bolton Professional Pharmacy. In 2003 he found himself the beneficiary of a CVS offer that led him to sell his business and join the CVS team with seniority.

To be closer to his family, originally from Atlanta but now living in Fayetteville, Amon decided to move and now calls the Lay Lake area home. “He is as laid back as it gets,” said Ansley.

Ansley calls Fayetteville home also, having graduated from Fayetteville High School. She started her college career at Wallace State in Dothan and later was accepted to Samford University. She has four dogs and eight cats. “I am a huge animal lover,” said Ansley.

Double A Drugs will be accepting all insurance providers. The process for contracting with a provider is part of the reason for the projected April 13 opening date. Double A Drugs has a Facebook page, making it easy to stay up to date on their progress.

Not that it requires explaining, but yes, Double A is for Ansley and Amon.