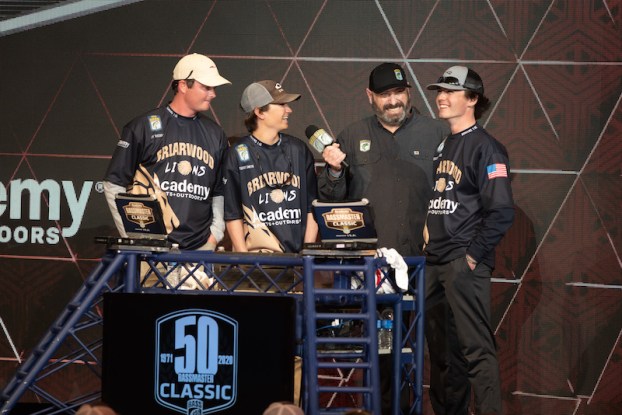 BIRMINGHAM — Forty nine of the most outstanding high school anglers from across the country have been named to the 2020 Bassmaster High School All-State Fishing Team presented by Academy Sports + Outdoors.

In Alabama, Briarwood’s Tucker Smith was one of five to make the team, as his storied career continued.

Having already won back-to-back national championships, Smith got to fish in the coveted Bassmaster Classic this year alongside Grayson Morris, with whom he won both national titles.

Close to a year ago, Smith was named a Bassmaster All-American, and with this All-State nod, he will be nominated for that position as one of the country’s 12 best high school anglers again this year.

The students were selected for the honor based on their success in bass tournament competition, academic achievement and leadership in conservation and community service.

“The Bassmaster High School All-American program continues to be the most prestigious in the country,” said Bruce Akin, B.A.S.S. CEO. “Academy Sports + Outdoors sponsorship of the program adds to that prestige. The All-State selection and honorable mention are a high honor, not only in recognition of the recipients’ fishing skills, but just as importantly, their scholastic, conservation and community service achievements.”

To be considered for the All-State Fishing Team, a student must have been nominated by a parent, coach, teacher or other school official. Students enrolled in grades 10-12 with a current-year grade point average of 2.5 or higher were eligible.

B.A.S.S. received more than 300 nominations from across the nation. From these, judges selected 49 student anglers from 33 states to make the All-State Fishing Team. In addition, 54 students received Honorable Mentions recognizing them for their tournament success as well as community service and academic achievement.

“Congratulations to all 49 anglers on being selected to the prestigious title of All-State or Honorable Mention,” said Hank Weldon, senior manager of the B.A.S.S. High School program. “It’s always so impressive to see the accolades of each applicant. Every parent and angler should be very proud of joining the team.”

A second panel of judges will review nominations of the 49 All-State team members and select the 12 members of the 2020 Bassmaster High School All-American Fishing Team presented by Academy Sports + Outdoors. As in All-State judging, criteria include success in high school fishing tournaments, involvement in conservation efforts and other community service activities.

The 12 finalists will compete in a one-day Bassmaster All-American High School Bass Tournament held during the 2020 Toyota Bassmaster Texas Fest benefiting Texas Parks and Wildlife Department event, a fan-favorite festival which is currently scheduled to take place June 5-9 on Lake Fork out of Quitman, Texas.

Elite Series anglers will serve as teammates and “coaches” of the student anglers in the tournament. The high school standouts will be honored on the main Texas Fest stage at the weigh-in.

By DAWN HARRISON | Special to the Reporter There is a new brand of athlete emerging, breathing life into a... read more