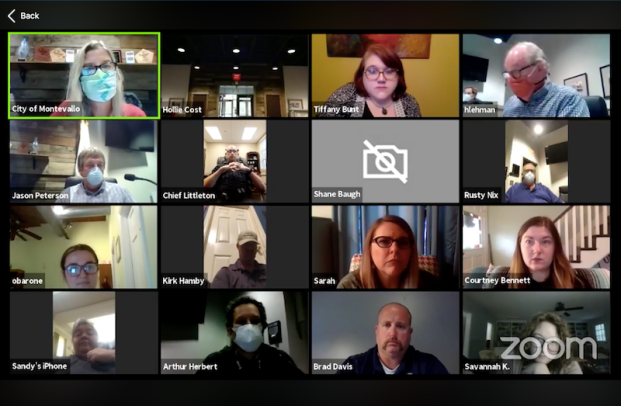 This screenshot shows Montevallo City Council members and city department heads during the April 13 council meeting, which was conducted via Zoom and live-streamed on the city’s Facebook page as part of the city’s efforts to follow COVID-19 health guidelines while still allowing the public to view and submit comments during the meeting. (File)

MONTEVALLO – The Montevallo City Council on April 13 took action on several items of business, including a proposal regarding restoration of the Mahler House and a request to add police laptops to the city’s computer service agreement.

In a regular meeting conducted via Zoom and live-streamed on the city’s Facebook page, the council approved to send out to bid a restoration project proposal for the Mahler House, also known as Perry Hall, located on Alabama 119 in Montevallo.

“We have been working so hard to get to this point,” Mayor Hollie Cost said of efforts to start repairs on the deteriorating antebellum home, which is part of a 167-acre estate Elizabeth “Betty” Mahler donated to the city in 2013 to be developed into a public historic and recreation site named Shoal Creek Park.

City Clerk Herman Lehman said the city had been working with an architect on preliminary plans before the COVID-19 pandemic started.

“The next step is to publish it for bid so we can start getting some pricing,” Lehman said.

Councilman Rusty Nix asked if the house still could be added to the National Register of Historic Places following the proposed restoration.

Lehman said the city could research it, even while the proposal is in the bid phase. He said the proposal aims at preserving the character of the house’s exterior while renovating it.

“It’s going to look exactly the way it is, it’s just going to be restored,” Cost said.

The proposal also includes rebuilding the front porch, enclosing the garage to be a catering kitchen, addressing foundation issues and renovating the inside of the house.

The council also approved to add the laptops to the computer service agreement for $1,038 each month and $74.20 per device.

Cost said the price was not requested in the initial bid.

“We’re just having an issue with some of (the computers) going down,” Chief Jeremy Littleton said. “They always need service. We didn’t realize these were not included in the initial plan that we went to. It’s something we really need to move forward on, if possible, so we can keep them up and running.”

The expense would come out of the city’s technology budget line item, Cost said.

HOOVER – The ongoing COVID-19 pandemic could cost the city of Hoover between $8 million and $15 million in lost... read more