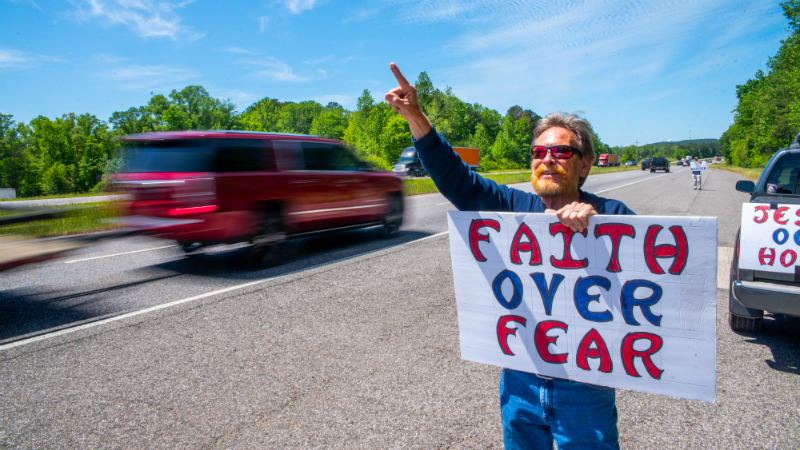 Eddie Burchfield displays signs of encouragement every day at the intersection of U.S. 280 and Shelby County 51. (REPORTER PHOTO/KEITH MCCOY)

Eddie Burchfield ministers to people in jails and hospitals, but with restrictions in place because of the COVID-19 pandemic, he had to find some other way to reach people.

Every day since April 1, Burchfield can be found at the intersection of U.S. 280 and Shelby County 51 between Chelsea and Westover, holding signs as people drive by—many of who respond with honks, waves and thumbs up.

Some even pull over to have a word of prayer, Burchfield said of his effort, which he calls “sign language.”

“I was just praying, ‘What can I do now to reach somebody or encourage somebody,’” said Burchfield, an ordained minister. “When I was 18, I worked for a sign shop back home in Bessemer, and I learned to lay out signs. I thought a sign is nonverbal communication, and if you don’t put too much on it, people can read it as they pass by.”

Burchfield carries four signs every day, each with three words written across them: Faith Over Fear, God Is Bigger, Jesus Is Alive, and Jesus Our Hope.

Burchfield holds one beside the road, while two more are posted on the back of his truck, along with American flags.

“They’re big enough that you can read them on either side of 280,” Burchfield said.

He chose that particular intersection because of the amount of traffic, proximity to his home and the large pull-off area nearby used by 18-wheelers.

Burchfield has had some help. He was joined a couple of days by Clayton Brown, a young minister from Vincent who eventually felt it was best for him to do the same thing on his side of town.

And Barry Vick has also joined Burchfield. The two met while Burchfield was doing jail ministry several years ago, and he has seen Vick turn his life around.

Though his effort came about because of the pandemic, Burchfield said he does not plan to stop even when life returns to normal.

“Right now, I don’t see an end, even if this COVID-19 ends,” Burchfield said. “The Lord just gave me another way of outreach.”

Ivey says order “is working,” asks not to let…