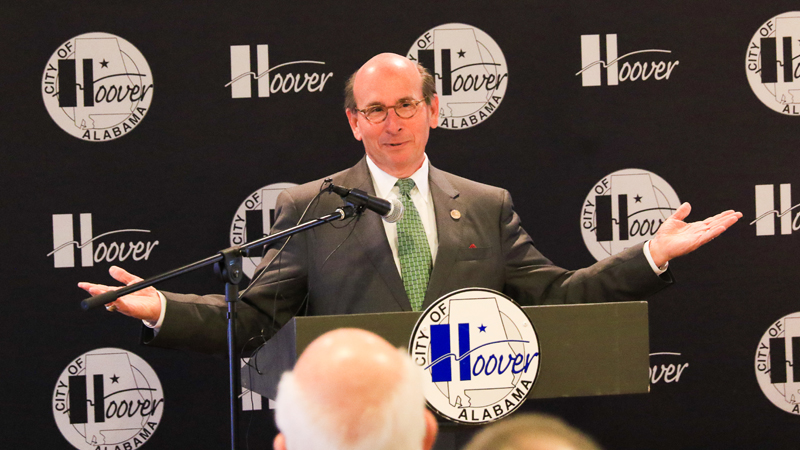 HOOVER – The ongoing COVID-19 pandemic could cost the city of Hoover between $8 million and $15 million in lost revenue, and city officials are putting together a plan to cut expenses to counteract the shortfall.

As many businesses are closed and residents comply with a stay-at-home order, Hoover’s sales tax receipts have dropped.

Mayor Frank Brocato and City Administrator Allan Rice presented the start of a plan to deal with the crisis at the City Council’s meeting on Monday, April 13.

“I want to commit to you, we’ll continue to work as a team,” Brocato said. “This is just a snapshot. We’ll be back again (with more information). We’ll be back every two weeks.”

Hoover’s COVID-19 Financial Plan had four objectives: forecast expected lost revenue in the current budget year, protect the financial health and stability of the city, provide the highest possible level of services to the public, and maintain Hoover’s status as the “municipal employer of choice.”

The midpoint dollar amount of projected lost revenue identified was $11.5 million, and officials presented control measures to cut almost that much ($11.2 million) from budgeted expenses.

Cuts from the city’s operation that have already been enacted include eliminating travel (savings of $236,000), limiting purchases to only those deemed critical with executive review (ongoing), savings from unfilled positions ($629,310), savings from canceled events ($692,659) and savings from overtime reductions ($501,000).

The canceled events include three of Hoover’s largest each year: the Mayor’s Prayer Breakfast, the Southeastern Conference Baseball Tournament and Celebrate Hoover Day.

Rice stressed that the projects should not be considered unimportant because they are being considered for cancellation.

“None of these are unnecessary, but we’re having to reprioritize,” Rice said.

The Council also approved a wire transfer of $250,000 to the Hoover Metropolitan Complex to maintain operations there.

The funds are for salaries of Sports Facilities Management staff members still working. SFM manages the Complex for the city, but all revenue and expenses remain under the city’s financial umbrella, officials said.