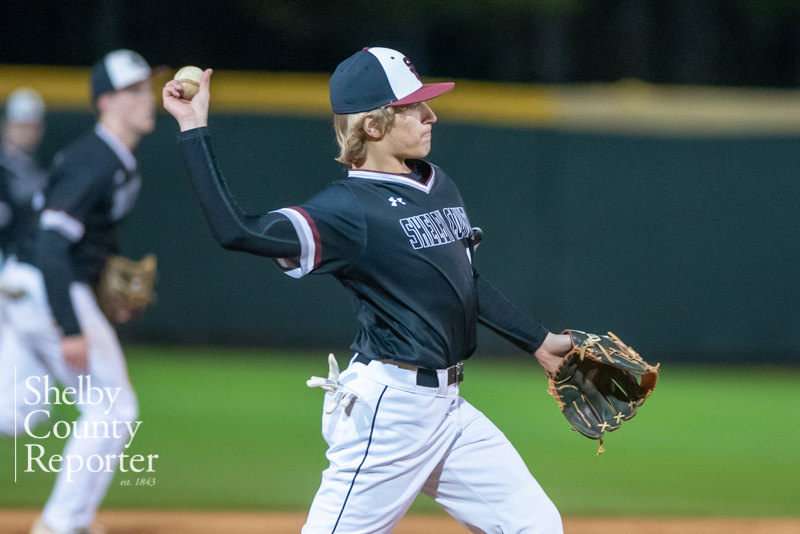 Shelby County's Austin Harris was one of many to have a strong early start to the 2020 baseball season to earn a spot on the All-County team despite the season being shortened. (Reporter photo/Keith McCoy)

With two teams ranked No. 1 through the first few weeks, six total teams inside their respective top 10 and two additional nominated for a spot in the top 10, the 2020 baseball season was shaping up to be a historic one, but it’s one that will leave us with an empty feeling.

Following state championship appearances from Briarwood and Chelsea last year, this year seemed primed for more teams to make runs at a title, but COVID-19 had other plans when it canceled the remainder of the season on Saturday, April 14, for all county and state teams

With Chelsea and Shelby County left ranked No. 1, Spain Park No. 4, Briarwood No. 6, Montevallo No. 8, Oak mountain No. 10 and both Calera and Thompson nominated for a spot, the season had plenty of promise.

Despite the novel coronavirus preventing the remainder of the season, several athletes deserve to be recognized with an All-County team, which includes all seniors from across the county as well after their final season ended early.

Pitcher: Reid Gongwer, sophomore, Chelsea. A young player, Gongwer was off to a strong 4-0 start with a 0.58 ERA and 30 strikeouts in 24 innings pitched.

Pitcher: Austin Harris, senior, Shelby County. An All-County member last year, Harris was 6-0 for the No. 1 Wildcats this season with a 0.29 ERA. In 24 innings pitched he totaled 36 strikeouts.

Catcher: Tyler Waugh, junior, Briarwood. Waugh was having a breakout season with a .394 batting average behind nine singles, two doubles, a triple and a home run. He also drove home 13 runs.

First Base: Cole Sester, senior, Oak Mountain. With a .439 batting average that included four doubles and 11 RBIs, Sester was set for a big season. He also had a 2-1 record on the mound with 14 strikeouts in just 12.1 innings pitched.

Second Base: Mitchell Pierce, junior, Oak Mountain. In 13 games, Pierce totaled an average of .389 at the plate with 12 runs scored and nine RBIs.

Shortstop: Carter Sidor, senior, Spain Park. With a batting average of .463, including 20 singles and five doubles, Sidor totaled 15 RBIs and 13 runs scored and also walked 11 times for the No. 4 Jags.

Outfield: Carter Frederick, senior, Chelsea. One of the best players in the state last year and the Hitter of the Year in the county, Frederick had a .351 average with five doubles, one home run and 13 RBIs early this year. He was also 2-1 on the mound with 37 strikeouts and a 1.09 ERA in 19.1 innings pitched.

Outfield: Colton Ledbetter, senior, Spain Park. One of last year’s best hitters, Ledbetter held a .414 average early this year and already had four home runs. He also had 17 singles and three doubles, while driving in 14 runs and scoring 18.

Outfield: Greg Oliver, senior, Shelby County. The best hitter on the No. 1 5A team, Oliver was batting .500 through 16 games with 20 hits, nine RBIs, 16 runs scored and an impressive 18 stolen bases.

Utility: Jaxon Butterworth, senior, Calera. A four-year starter, Butterworth was having his best season both pitching and batting. He held a .425 average with four doubles and a triple at the plate, which led to 11 RBIs. He also never struck out this season. On the mound, he held an ERA of 1.00 in 21 innings with 24 strikeouts.

Designated Hitter: Jackson Webster, junior, Chelsea. Webster was off to an impressive start with a batting average of .436 behind seven doubles, while adding 10 RBIs.

Pitcher: Eli Mefford, senior, Spain Park. With five starts and six appearances, Mefford was on pace for a major breakout senior season. He finished 4-1 with a 0.94 ERA and 20 strikeouts in 22.1 innings pitched.

Pitcher: Carson Hobbs, senior, Thompson. Part of a loaded and consistent Thompson team this year, Hobbs held a batting average of .375 with 19 RBIs, 16 runs scored and seven stolen bases. He also went 3-1 on the mound with a 1.75 ERA and 32 strikeouts in 24 innings pitched.

Pitcher: Carson McKinney, junior, Briarwood. One of last year’s best pitchers, McKinney was back at it again this year with 24 strikeouts in 19.2 innings pitched. He finished 3-1 with a 1.78 ERA.

Pitcher: Jake Rivers, senior, Oak Mountain. He didn’t get to put as big of a stamp on the season as he could have, but Rivers was 2-0 with a 1.61 ERA and 15 strikeouts in 13 innings pitched.

First Base: Grant Cordes, senior, Montevallo. Cordes held a strong average of .471 at the plate with six doubles, two home runs and triple. He added 14 runs and was 6-for-6 on stolen bases. He was also 3-0 on the mound with a 2.8 ERA and 14 strikeouts in 10 innings.

Second Base: Malik Inabinette, senior, Montevallo. With a .333 average behind a double a triple and a home run, Inabinette drove home 11 runs and scored 14 himself, while sliding in safely on all seven of his stolen base attempts.

Third Base: Davis Gillespie, sophomore, Oak Mountain. Gillespie posted a batting average of .372 with 11 RBIs thanks to three doubles and one home run. He also went 2-0 on the mound with a 1.61 ERA and 15 strikeouts in just 13 innings.

Outfield: Matthew Windham, sophomore, Calera. Picking up a hit in 16 of his 32 at bats, Windham batted .500 in the shortened season with four doubles.

Utility: Harrison Poplin, senior, Thompson. On the mound, Poplin tossed 27.2 innings and struck out 26 batters, while holding an impressive 0.25 ERA. He also batted .217 at the plate with 13 RBIs.

Girl power: The battle for women’s wrestling to be…