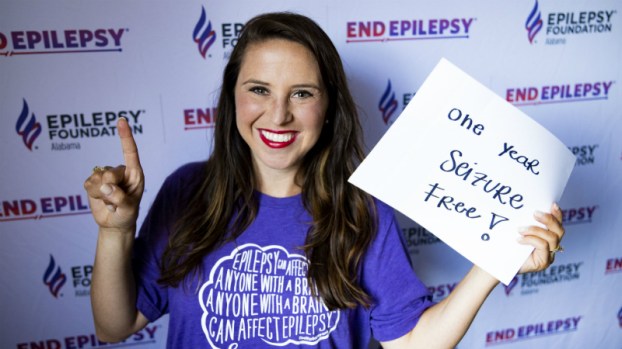 She was hired to be the executive director of Epilepsy Foundation Alabama later in the fall of 2019.

“I could have never imagined the way the seizures completely changed my life,” Franklin said. “Since my onset of epilepsy, I’ve learned that 3.4 million people in the U.S. live with active epilepsy, including more than 54,000 in Alabama. I hope my willingness to share my story encourages other people with epilepsy in our state, who are often very familiar with the type of isolation situation we are all in right now.”

According to Alabama state law, a person who had a seizure within the last six months has his or her driver’s license suspended, which often causes challenges in a state without readily-accessible mass transportation options.

One in 26 people will develop epilepsy at some point in their lives, and more people have epilepsy than Parkinson’s disease, multiple sclerosis and cerebral palsy, combined.

Epilepsy has a wide range of causes, there are a number of “types” of seizures, and the severity of impact can be very different for each person.

“This is why the fight to ‘End Epilepsy’ is important to me and why I share my story,” said Franklin. “I truly believe in the work being done by the Epilepsy Foundation, especially as it relates to research and seizure control.”

Epilepsy, the most common serious brain disorder worldwide, is the underlying tendency of the brain to produce seizures which are sudden abnormal bursts of electrical energy that disrupt brain functions.

According to the Centers for Disease Control and Prevention (CDC), more than 54,000 people in Alabama are living with epilepsy and seizures, including more than 7,500 children. Over a lifetime, one in 10 people will have a seizure, and one in 26 will be diagnosed with epilepsy.

For more information about COVID-19 and epilepsy, visit EpilepsyAlabama.org/covid-19-epilepsy-fact-sheet/.