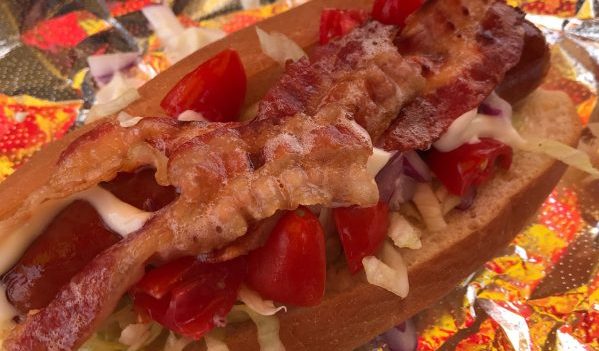 If you’ve ever spent much time on the quaint streets of Columbiana around lunchtime, chances are you’ve heard Mark Lollar, owner of The Great American Hot Dog Stand, singing while he serves up the best hot dogs around from his famous hot dog cart.

It all started in the early 2000s when Lollar worked for a recycling warehouse in Avondale. Every day at lunch, he noticed a woman working a food cart at lunch, and she always had a line waiting to be served.

“I began to think then that what she was doing might just be the way to go,” Lollar said.

Then, during the housing bubble in 2007, he did just that. He built his first hot dog cart and began serving up hot dogs at church functions and festivals.

“That was in the early days of mobile food,” Lollar said. “It was much harder to get licensed to sell food that wasn’t made in a brick-and-mortar location.”

After four years of it being a side hustle, Lollar nearly sold his cart, but after coming out of a contract job and seeing that the health department had become more helpful over that time, he decided to give it one more go, full-time this time. He’s been doing it ever since.

Enter the Coronavirus crisis.
In a turn of events that no one could have predicted, in many ways, Lollar’s mobile business is set up to serve very safely in this time of quarantined uncertainty.

“Thanks to state and county regulations, businesses like restaurants are already set up to protect the public from all manner of terrible things, but that being said, we have still had to adapt to newer regulations to keep people safe too,” he said.

Safety during the pandemic is of utmost importance to Lollar, as he continues to run his business and keep his own family safe, a family that includes his own 90-year-old mother-in-law.

He recently went through an extra safety class from a nationally credited source in order to heighten the safety of his customers.
“We hand every item to each customer. There is no reaching into the chip stash or grabbing a drink out of the cooler,” he said, adding that small businesses are learning to adapt in order to stay in business and keep the community they serve even safer at the same time.
Speaking of small business, Lollar understands the need now more than ever to keep business local. He sources everything he can locally, doing his part to keep the little guy, just like him, open and ready to serve their communities and families.

Stop by this week and help out one of the essential local businesses that hold our community together.