Lelia Mitchell, 67, is a native of Calera, Alabama.

In 1968, during the era of busing, she was among the first to start at Calera High School; in fact, she started a year early as a junior.

“We were pioneers, and we were ready for change. We didn’t go angry,” Mitchell said. 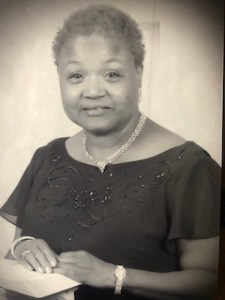 She graduated Calera High School as an honor student in 1970.

Mitchell moved from Calera to Montevallo when she married her spouse, James, in 1975.

They had met in high school. They had two sons.

James passed in 1995. “James was a good provider and good father; he loved his family. We had many things in common. He loved people. I liked having companionship,” Lelia Mitchell said, reflecting upon her relationship with her spouse of 20 years.

Mitchell enjoyed a 30-year career at Alabama Power as a customer service representative. She enjoyed the experience of working with the public and the financial stability the job offered.

Since retiring in 2007, she has held a number of different positions, including substitute school teacher and chief clerk for Montevallo Parks and Recreation.

Mitchell has been a volunteer with The Leaders of Tomorrow (LOT) at Montevallo Middle School for the past 15 years.

In 2014 she became board president. Created 20 years ago, the group is based on the knowledge that there are all kinds of leaders and that much can be done to guide them in the right direction and to enhance the leadership skills of seventh graders.

“I love doing outreach,” Mitchell said. “Being available to work and help others. There isn’t enough being done in the community.”

Mitchell received her certification as an instructor with the Shelby Springs District Christian Leadership School.

In January of this year she became Dean of Records.  She is also the secretary of the Shelby Springs District Women Mission and Education Convention.

Her past community activities include board member of Positive Image Outreach Ministries, Inc., president of Montevallo High School PTO, and board member and assistant secretary of the Montevallo Civitan Club.

Its objective was to inspire listeners through music, readings of scripture and stories.

Perhaps her biggest project is Encouragement Learning Foundation (ELF) Inc., of which Mitchell is founder and executive director.

Created in 2004, ELF provides free literacy tutoring to youths and adults. ELF partners with other area ministries such as We Care in its prison visitation ministry and offers leadership training for pastor and laymen.

Summer literacy camps for school-age children run for several weeks during the summer.

Mitchell has been a member of RSVP for the past 10 years.