In February, the Shelby County Arts Council received over 300 preliminary entries into its 2020 Student Juried Art Show, of which 86 were chosen to compete.

“Fortunately we received all the finalists’ work prior to March 13, which allowed us to move forward with the changes we needed to make what was supposed to be a month-long gallery show into a virtual gallery viewing,” Executive Director Bruce Andrews said.

The crew at the Arts Council worked quickly to organize, hang, film and produce what has turned out to be a beautiful presentation of the body of work created by talented junior artists from all over the state of Alabama. 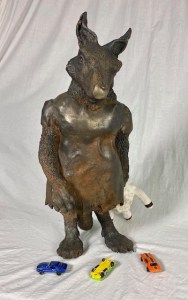 Originally, the show was supposed to end with an awards ceremony on April 19.

“What was meant to be the end has now become the end of the show,” Andrews said, as the awards were announced online two days after the virtual tour was released on all of SCAC’s social media platforms.

The virtual tour will be in place through at least the beginning of May and perhaps longer if the shelter-in-place orders are maintained beyond that.

Because of the pandemic, the Arts Council chose to quickly adapt by learning new technology they already had access to, but had not tested yet.

In the end, Andrews believes that this will benefit the organization going forward because they’ll have more platforms from which to create and promote art.

The art in the show was divided into five main categories: 3D, drawing, painting, mixed media and photography.

The best painting award went to another ASFA student, Catherine Smith, for her work “The Fools.”

The best mixed-media went to ASFA’s Ella Yatabe for “Cover.”

Other honorable mentions were given and the full virtual tour can be found on the Shelby County Arts Council Facebook page.

Originally, part of the benefit of competing in this program was access to the judges as mentors.

Since the artists can’t currently meet the judges, the Arts Council is working on a plan to make that happen in the future.

“Just like with athletes, schools are looking to recruit the best and the brightest to their art departments too,” Andrews said. “We hope the exposure these kids get through this show will help them as they move toward creating those portfolios that grab the attention of schools that will compete for their attention.”

The Shelby County Arts Council would like to thank the Blue Cross Blue Shield Caring Foundation, the University of Montevallo and the University of Alabama at Birmingham for their sponsorship of this program, as well as so many other benefactors that keep the Arts Council running with their generous support.