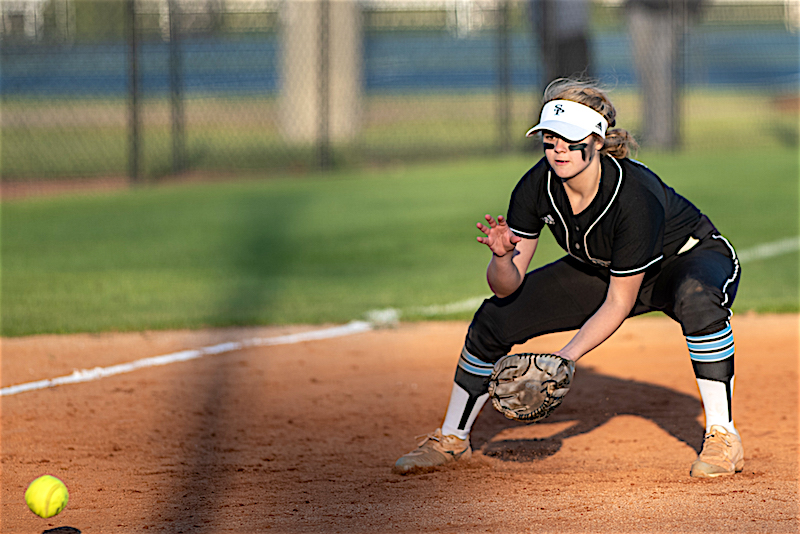 Spain Park senior Alexis Anderson was off to one of the strongest starts of any player in the county this year, earning a spot on the All-County team with many others. (File)

As usual, the 2020 softball season was shaping up to be another impressive one with three teams returning off state tournament appearances last year.

All three were represented in the softball season throughout this season as were others when the season came to a stop due to the COVID-19 outbreak, which canceled the remainder of the season.

When the season halted, Spain Park was ranked No. 1 in Class 7A at 21-0 overall, while Helena was just starting to click and Shelby County, returning almost everybody from a state tournament appearance last year, only got to play one game.

It was a disappointing way for this season to unfold, but the athletes and seniors on every team are more than worthy of recognition, which is highlighted on the 2020 All-County Softball Team below:

Pitcher: Annabelle Widra, junior, Spain Park. The multi-time player of the year in Shelby County, Widra posted a batting average of .549 with eight home runs, 25 RBIs and 32 runs scored offensively. She also went 9-0 in the circle with a 0.525 ERA and a remarkable 78 strikeouts in 40 innings pitched.

Pitcher: Briana Copeland, junior, Pelham. Copeland was off to a strong start this season. She held a batting average of .321 at the plate with three homers and 12 RBIs, while going 3-3 in the circle with a 2.45 ERA and 58 strikeouts in 40 innings.

Pitcher: Ella Reed, freshman, Spain Park. Reed gave the Jags a strong 1-2 punch this season after going 11-0 with a 0.82 ERA this season.

First Base: Paci Clark, freshman, Shelby County. As an eighth grader, she averaged .463 at the plate with 13 doubles and 32 RBIs. She was going to be a major contributor for the Wildcats again this season.

Second Base: Peri Clark, senior, Shelby County. One of the best hitters in the county last year with a .555 average, 18 home runs and 12 doubles, she drove home 55 runs, walked 25 times and struck out just four times. She would have been one of the best again this year.

Third Base: Alexis Anderson, senior, Spain Park. Anderson was off to the hottest start of any player in the county this year with a .553 batting average. She had three homers, 12 doubles, 29 RBIs and 20 runs scored.

Outfield: Natalie Whitner, senior, Shelby County. Whitner batted .453 last year with seven home runs, 18 doubles and 51 RBIs. She was another key contributor back for the Wildcats this year.

Outfield: Ella Pate, sophomore, Thompson. Pate is going to be a name to watch the next two years after posting a .431 average with seven doubles, five home runs and two triples early this season. She also posted 14 RBIs and was a perfect 6-for-6 on stolen bases.

Outfield: Lydia Coleman, junior, Spain Park. In 21 games, she batted .455 with 15 RBIs and 23 runs scored. She also had two triples and two home runs this season with 12 stolen bases.

Utility: Maggie West, senior, Shelby County. She batted .468 last year with five homers, nine doubles and five triples. She also had 31 RBIs and 17 stolen bases, and was set for a big senior year.

Utility: Mackenzie Thompson, senior, Spain Park. Thompson batted .391 this season with 17 RBIs and was the third best hitter on the No. 1 team in the state.

Designated Hitter: Lauren Watts, senior, Pelham. Watts was batting .458 with two doubles and four RBIs when the season came to an end.

Pitcher: Caroline Campbell, senior, Briarwood. Campbell was a five-year starter at Briarwood and is now headed to Birmingham Southern to play collegiately.

Pitcher: Maddy Walker, junior, Vincent. Walker was set for another incredible season after posting a .536 average with five doubles and 11 RBIs in 11 games.

Pitcher: Tyler Erwin, junior, Chelsea. Erwin not only had 45 strikeouts in 34 innings with only five walks allowed to post a 2.4 ERA, but she also batted .333 at the plate with seven RBIs and two home runs at the plate.

Catcher: Payton McDonald, junior, Calera. McDonald was a major highlight for Calera with a .556 average this season.

Second Base: Taylor Harrington, senior, Spain Park. Harrington batted .377 in 58 at bats this season with 14 runs scored and 10 RBIs.

Shortstop: Abi Brown, senior, Oak Mountain. Brown’s impressive career came to an early end this season with a batting average of .376 with five RBIs and one home run.

Third Base: Kennedy Foote, senior, Thompson. Foote left her stamp on the county for several years and was batting .359 with four doubles, 11 RBIs and eight walks early in her senior season.

Outfield: Jenna Williams, sophomore, Thompson. With a batting average of .395 and 10 RBIs, Williams was on pace for a strong sophomore season. She had six stolen bases and posted three doubles and two home runs.

Utility: Jordan Douglas, freshman, Calera. Douglas is a young player that was off to a remarkable start this season with a .615 batting average and a slugging percentage of .750.

Utility: Hayden Dennis, junior, Montevallo. Montevallo’s best player at both pitcher and shortstop, she was the leadoff hitter this year and has offers from Huntingdon and Marion Military Institute.