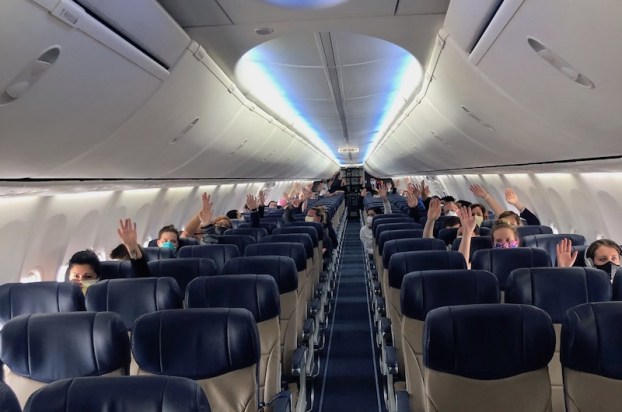 Nurses raising their hands on the flight to New York City taken by Kelli Kleysteuber, an Alabaster native. A flight attendant took the photo. (Contributed)

COLUMN: Pulling together during a challenging time

The ongoing pandemic has been hard on everyone. Many people have lost their jobs. Businesses have closed. Those that are still open struggle to remain open. People who still have jobs work from home while trying to care for children, in many cases.

That’s not to mention the high school seniors robbed of their last days together and a graduation ceremony, athletes left to wonder what could have been and couples who can’t celebrate their wedding with family and friends like they planned.

But as is always the case during trying times, there is plenty of good news to share.

Two local nurses have traveled to New York City to lend a hand on the front lines of one of the biggest COVID-19 battlegrounds in the world.

Kristen Kytle went to NYC from Brookwood Baptist Medical Center, where, at the time, there was only one person on a ventilator.

“They’re all on ventilators here,” Kytle said. “At Brookwood, most had a little bit of respiratory difficulty but otherwise they were breathing fine on their own. But here, they’re on dialysis, experiencing kidney and lung failure and even in medically induced comas.”

For the next eight weeks, Kytle and her coworker Carrie Williams are working four days a week at Southside Hospital on Long Island in Bay Shore, New York. They’re living at an extended stay hotel just minutes away. Their contracts end on June 11.

The 2005 Thompson High School graduate is putting in 84 hours a week for 21 straight days, after which she will have the option to either extend her contract or return home for one to two weeks before continuing. If she chooses the latter, she will have to remain in quarantine for virtually the entire time she is home.

“It just felt like the right thing to do,” Kleysteuber said. “A lot of times it is chaos. I’ve never had a situation where there was not enough oxygen outlets on the wall for patients.”

During shift changes at 7 a.m. and 7 p.m. each day, New Yorkers flood the streets with applause for health care workers. We should feel the same way, even from home.

COLUMN: Coming together to fulfill the need