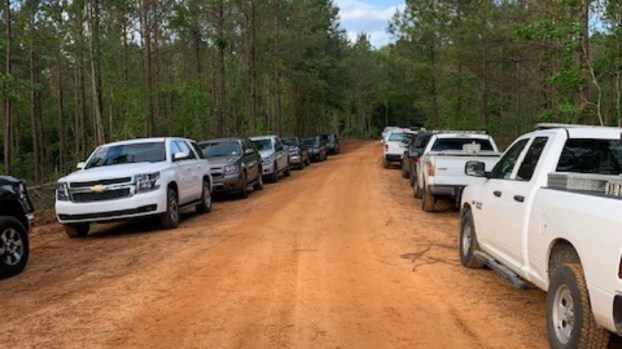 Numerous agencies have contributed to the search in Perry County for a missing Hoover man. (CONTRIBUTED)

HOOVER – Searchers have still been unable to find a missing Hoover man believed to be in Perry County.

“Today we conducted our most extensive and exhaustive search so far for Mr. Frank Stevenson,” read a Hoover Police Department Facebook post. “Beginning at day-break this morning, 80 searchers methodically covered an expanded search area, again, without success. The terrain and conditions continue to be a major challenge. Several hundred acres have now been covered with no signs of Mr. Stevenson.”

Frank Morgan Stevenson was last seen on Tuesday, April 14, when he left his residence on Golf Drive in Bluff Park to drive to a credit union in Riverchase, according to information provided by HPD.

Stevenson did not make it to his destination and has not been seen since.

Late in the afternoon of Monday, April 20, Stevenson’s car was located on a logging road in Perry County, near Marion.

“An individual riding a 4-wheeler on hunting land saw the vehicle and notified authorities,” read an HPD Facebook post. “Although it cannot be ruled out, there are no obvious signs of foul play thus far. The search area terrain is difficult, wet and encompasses thousands of acres. We ask everyone to please keep the searchers and especially Mr. Stevenson’s family and friends in their thoughts and prayers.”

Stevenson suffers from dementia and other health problems and may have become disoriented, according to HPD.

“He did not have his cell phone in his possession and only had a small amount of cash,” the post read. “We believe he was carrying a wallet with identification, but had no credit cards. His daily medications were also left at his residence.

“Due to the length of time since his disappearance, we have grave concerns about his health and well-being.”

The Alabama Law Enforcement Agency’s air unit has assisted, along with drone operators from HPD and tracking dogs from Bibb prison.

By ALEC ETHEREDGE | Managing Editor Between Friday, April 24 and Sunday April 26, there were 28 new cases of... read more