UPDATE: County has no new cases of COVID-19 in last 24 hours

For the first time since the first two cases were confirmed in Shelby County on Sunday, March 15, there were no new cases of COVID-19 in Alabama in the last 24 hours as the count remained at 319 confirmed cases of the virus on Wednesday, April 29.

This comes as testing results have come in more frequently as well with 3,719 tests now administered, which totaled 388 more tests in the last 24 hours.

Since then, overnight, there was one additional confirmed case to bring the county’s total to 320 early on the morning of Thursday, April 30.

The county death total has risen to 11, while the statewide death total is now at 255. Of those who have died from the novel coronavirus, 77.3 percent have been older than the age of 64.

There have now been 951 hospitalizations across the state since the first case on March 13, which is an increase of 13 in the last 24.

So far, 908 health care workers have had confirmed cases since the onset, while 335 patients have been in the intensive care unit and 195 on ventilators. 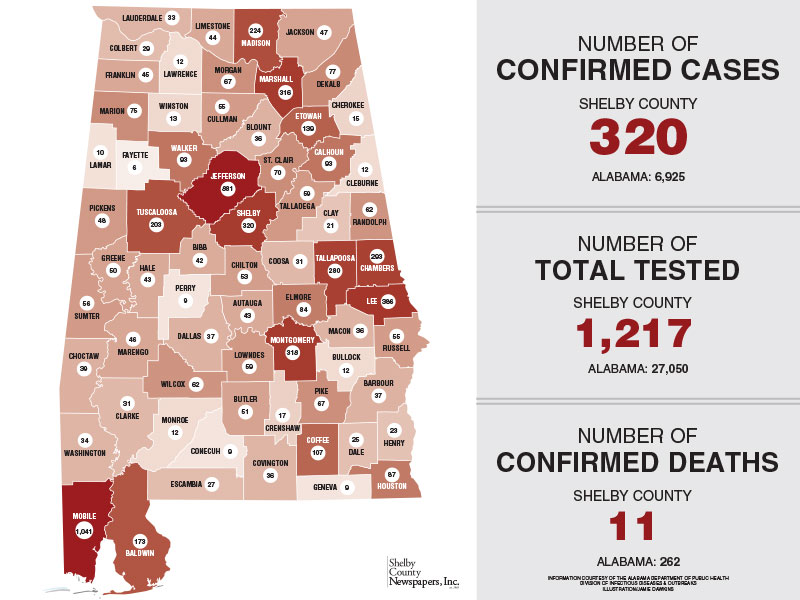 Gov. Ivey downgrades to safer-at-home order, some businesses to reopen