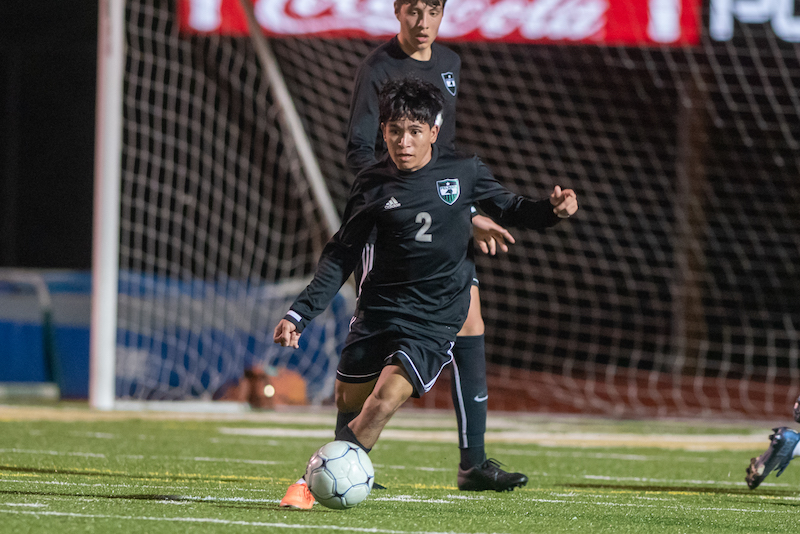 Pelham’s Oscar Cruz, above, was one of several to make the 2020 All-County soccer team after strong starts to a shortened season. (File)

Over the last seven years, the county has seen at least one state champion in the four different classifications, and it looked as if that streak may continue this year.

But COVID-19 ended up bringing the season to an abrupt end more than a month before the postseason.

But despite that ending, several left their mark on the 2020 season and we’re honoring them on the 2020 All-County soccer team, while also honoring all seniors that had their season cut short.

Forward: Larry Estrada, senior, Montevallo. With 19 goals and three assists, Estrada was on pace to lead the county in goals this season for an improved Montevallo squad.

Forward: Braxton Tubbs, senior, Briarwood. Tubbs was the leader of a Briarwood team hoping to repeat as state champs thanks to nine goals and two assists in 10 games.

Forward: Konnor Fulford, senior, Thompson. The Warriors were having their best season in a while and Fulford was a major reason why with 12 goals and six assists in the first 14 games.

Midfield: Andrew Messier, senior, Chelsea. Messier is the all-time tackles and interceptions leader for Chelsea and the captain of the No. 6 Hornets. He was one of the top players coming into the season.

Midfield: Luis Lopez, senior, Pelham. A three-year starter and captain, Lopez made plays happen on both ends of the field for the Panthers with three goals and two assists this year.

Midfield: Jose Villanueva, senior, Thompson. In 14 games, Villanueava had seven goals and eight assists this season and is a UWA commit.

Defender: Oscar Cruz, senior, Pelham. The best defender on the No. 1 Panthers, Cruz was a major key for their championship aspirations.

Defender: Allen Melendez, sophomore, Spain Park. The No. 3 Jaguars’ best defender, Melendez has played every game since his freshman year.

Defender: Ryan Webb, senior, Oak Mountain. With five goals and two assists, Webb was a playmaker on both ends of the field.

Goalkeeper: Joseph Gage, senior, Chelsea. Probably the most talented returning keeper in the county if not the state, Gage was closing out a four-year career as a starter and second all-time on the team in shutouts and caps.

Goalkeeper: Mehki Dimbo, senior, Thompson. The success of the Warriors this season wouldn’t have been possible without Dimbo’s nine shutouts in 14 games. He had a save rate of 82 percent and allowed just 0.42 goals per game.

Forward: Zach Martin, sophomore, Oak Mountain. Martin led the Eagles in goals early in the year with seven and added four assists to tie for the team lead.

Forward: John Richardson, senior, Westminster at Oak Mountain. A leader and captain, Richardson was set to lead the Knights on a strong playoff run.

Forward: Jackson Nabors, sophomore, Indian Springs. Part of the All-Metro team as well, Nabors was a major threat for one of the best teams in the state.

Forward: Chris Nettuno, junior, Chelsea. A three-year starter, Nettuno was second on the team in goals early this season and will be a top playmaker back next year.

Midfield: Cooper Neal, senior, Chelsea. Neal was the team leader in blocked shots and another key for the Hornets this year.

Midfield: Anthony Alcantara, senior, Helena. With three goals and eight assists as a three-year starter, Alcantara was on pace for a strong year with a much improved Helena team.

Defender: Moises Munoz, junior, Pelham. As a captain and defensive leader, Munoz was key for a team that posted seven shutouts this season.

Defender: Grant Grissom, senior, Briarwood. Grissom had two goals in 11 games, but was a consistent defender as a four-year varsity player.

Goalkeeper: Braden Troxell, junior, Pelham. In his first year as a starter, Troxell made 62 saves and had seven shutouts with a .769 goals against average.

Girl power: The battle for women’s wrestling to be…