The middle of three children, Daniel “Dan” Acker is a Birmingham native.

He graduated from Samford University in May 1959 after earning his bachelor’s degree in history with a minor in physical education.

He taught history and P.E. at Thompson High School for 17 years. 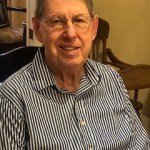 In 1976, he continued his career as administrator and teacher at the Shelby County Vocational School in Columbiana.

Acker was elected to the Shelby County Commission in 1992 and served District 4 for 24 years before retiring in 2016.

“I enjoyed serving the people,” he said.

During his tenure as a commissioner, Acker worked tirelessly with the other commissioners and the county management team on public facilities and infrastructure projects.

On Oct. 24, 2016, Acker was presented a commendation for his distinguished public service to Shelby County.

Acker, who turns 84 this year, has always been a sports enthusiast.

He played community church league softball for 35 years before deciding to turn in his glove at the age of 60.

He also played basketball, perhaps his favorite sport of all.

The list of sports goes on – softball, ping pong and golf.

He was a member of the Central Civitan Club for 39 years and Alabaster Pelham Rotary Club from 2004-2012.

He has been a member of the Sons of the American Revolution since 2004.

He was a volunteer with Alabaster Meals on Wheels and served on the board of the Middle Alabama Area Agency on Aging.

Acker assisted his community in numerous new ventures, such as the establishment of the Alabaster Recreation and Swim Club, the Red Cross Chapter in Shelby County, the ARC program serving children with special needs, and the Alabaster YMCA.

Acker has been married to his wife, Judy, for the past six decades.

Dan became an RSVP member in 2009 and is a recipient of the Presidential Volunteer Service Award.

By DAISY WASHINGTON / Community Columnist Lelia Mitchell, 67, is a native of Calera, Alabama. In 1968, during the era... read more