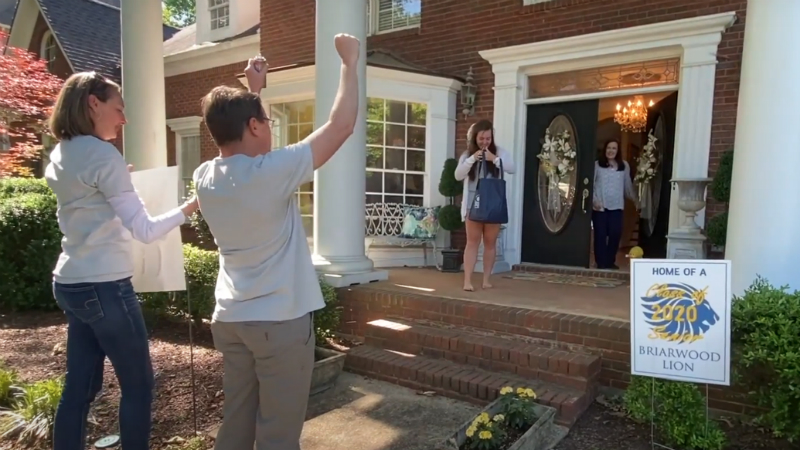 With school closed and social distancing guidelines in place because of the COVID-19 outbreak, Briarwood leaders visited each of the 143 seniors to drop off gifts and give them a moment in the spotlight.

“Since we can’t have the party here, we’re going to bring the party to their doorstep,” Upper School Head Shawn Brower said.

About 30 Briarwood teachers and administrators formed groups of two to three, and the 14 groups each had a route to deliver gift bags on Monday, April 27.

Dean of Discipleship Bryan White gathered all the students’ addresses and plugged them into an app that determined the routes.

Brower and Briarwood football coach Mathew Forester took along the school’s Louie the Lion mascot and a couple of large flags ordinarily used at sporting events to create a particularly festive atmosphere.

Brower said his group delivered to 22 homes, mostly in the areas of Highland Lakes and Dunnavant Valley.

The goal was to start at 8 a.m. and finish two hours later.

“We have a husband and wife, Nicole and David Conrad, they brought their elementary girls who were holding up signs,” Brower said. “There was lots of silly string. We had fun all around.”

The students’ parents had been contacted just days earlier with a message that encouraged them to make sure their children were home and awake, without giving away the surprise.

“There was very little spilling of the beans because several of them came down, right out of bed, confused,” Brower said. “We had one student, he looks at me like, ‘What are you doing at my house?’”

The gift bags included a beach towel, T-shirt and wristband emblazoned with the Briarwood lion logo and “Briarwood Strong” slogan; a letter from the school’s alumni organization that included a season pass for athletic events next school year; a yearbook; their caps and gowns; and cookies.

A team of about 10 people met on Saturday, April 25, to stuff the bags, Brower said.

The idea came up about a month ago as the school’s leadership team looked for creative ways to celebrate the seniors “down the stretch,” Brower said.

The result was a “Senior Week,” of which the deliveries were just a part. The school also uploaded a series of videos to its YouTube channel that highlighted the seniors and gave them messages of encouragement.

“I think it was a good last week,” Brower said.