During World Wars I and II, our grandparents and great-grandparents all over the world planted Victory Gardens, not only to make their food rations last, but also to build morale and encouragement.

The residents of Shelby County seem to be bringing about a revival of this long-gone practice in the face of the worldwide coronavirus pandemic. 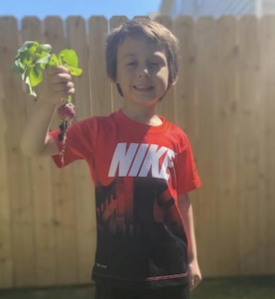 Leslie Frey’s 5-year-old son shows off the first radish harvested from his own garden. (Contributed)

Ashley Crumpton, a teacher at Shelby County High School, said she’d wanted to have a garden for several years but never had the time.

“I saw this pandemic as the perfect opportunity to finally plant the garden I’ve always wanted,” Crumpton said. “I grew up eating the foods my grandmother canned from their garden and vividly remember picking from my grandparents’ garden. I hope to pass that down to my own children one day.”
She said her family installed their garden together on Good Friday, and they plan to make it a yearly event.

As for making food stretch, she said, “I plan to learn how to can and pickle things as my grandmother did many years ago, but I may have to recruit my grandfather for help with that!”

We also caught up with Leslie Frey of Chelsea. Frey began making plans for her garden in January well before the news of the pandemic became widespread.

Her decision to garden stemmed from trying to find a way to get her picky 5-year-old to broaden his experience of new foods.

From the beginning, her son has helped plant seeds and water the plants and check on the garden daily, and he has so far tried everything it has produced, but she said he’s still is not impressed with radishes.

“We love our garden now that life looks so different than our normal,” Frey said. “It’s definitely not big enough to live off of, but it’s nice to know exactly where at least some of our food came from.”

A manager at a local store of a big-box retailer that offers garden supplies and equipment said their raised bed and container garden supplies have sold out many times over this year. “The vegetable suppliers have also had to restock several times,” he said. “The early rain we had at the beginning of the year yielded an above-average level of ready-for-market varieties. The mild temperatures have given these plants above-average size now as well. So, it’s has been a perfect storm weather-wise for gardening.”

He also said the first late February deliveries typically last the store until mid-April, so the need to restock this year since then three to four times at this point is unprecedented for them, showing that the community is taking the opportunity of time to plant and taking seriously the need to have fresh food on hand this year.

Whether to kill time or to ensure groceries are available, it looks like the residents of Shelby County will have gardens to tend to this year and that gardening will become one of the more positive parts of our new normal.

By SASHA JOHNS / Community Columnist In February, the Shelby County Arts Council received over 300 preliminary entries into its... read more