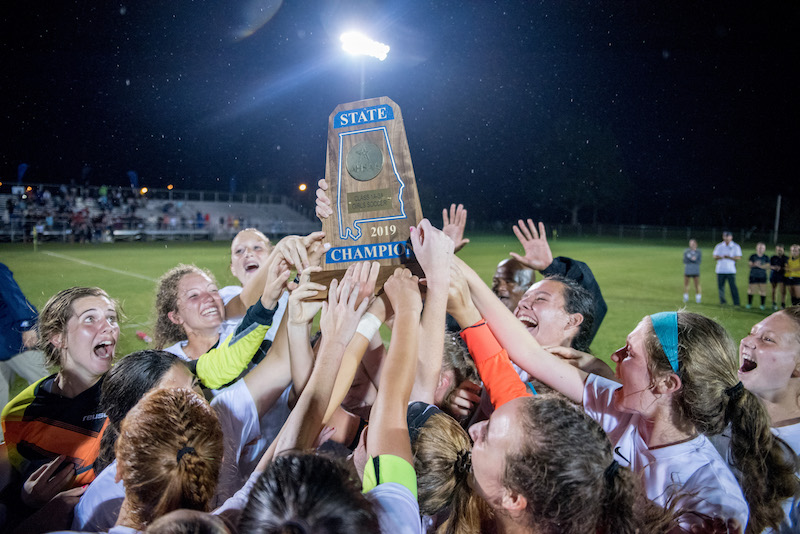 The Westminster at Oak Mountain Knights won a thrilling first ever state championship in 2019 behind a last-second overtime shot a year ago. (File)

It was a win like no other. After head coach Ken Headley passed away just before the season started, the Westminster at Oak Mountain girls soccer team made it their sole mission to claim the 2019 Class1A-3A State Championship in his honor.

After losing in the first round in 2016 and then in the quarterfinals to Montgomery Academy in both 2017 and 2018, the Knights came back in 2019 and punched their ticket to the Final Four. But they didn’t stop there.

Claiming their first Final Four victory in school history, they advanced to the state championship game and saved their most exciting finish for last.

After grabbing a 2-1 lead in the second half, Westminster watched Altamont tie the game in the final four minutes of regulation, which seemingly deflated the Knights in an exhausting game.

But, after the majority of the overtime was scoreless, Westminster’s Morgan White found herself with the ball with less than 10 seconds left. Close to 40 yards away, she dribbled to her right a couple of times and found a clearing, where she then drilled the game-winner into the back of the net from 35 yards out with less than five seconds to claim the team’s first title in school history.

“Honestly, I don’t remember seeing anything,” White recalled a year later. “I remember there was a girl, and then there wasn’t. Then I knew I had to shoot. I was thinking just don’t go out of bounds. It was honestly a hope and wish kind of thing. I was trying to remember two most important things when it comes to shooting. Then it went in.”

That moment will live on as one of the most exciting in school history, and is a moment white will never forget.

“The thing I remember the most, honestly, was after when we celebrated,” she said. “Katie (Hoglund) and I were talking and it just all of a sudden hit us. All the work we put in since freshman year paid off. It was such a relief. All the extra things we did were finally worth it because we finally did what we were hoping to do since freshman year.”

The team also followed through on their promise, which made the memory even more special for head coach Jay Hammond, who took over for Headley.

“After ‘Momo’ hit the shot, I looked up to the sky and said thank you to Ken,” Hammond said, recalling the special moment a year later. “Again, it was for him, and I think it was a legacy built on what past coaches built and what he built. I think it was more of a desire to finish out on that note for him than anything.”

Hammond said this year’s group, which included several impressive returning players including White, Hoaglund, Mary Catherine Griffith, Virginia Whelch and others as seniors, wanted to continue playing for Headley. He said that is something that wasn’t just a one-time thing.

But for this year at least, the Knights won’t get the chance to repeat.

As we sit on the verge of what would have been Final Four week in Huntsville a year after Westminster’s incredible overtime win, there will be no games taking place at John Hunt Park in 2020 due to COVID-19 shutting the season down on March 13.

“Not being able to finish out season hurt them a lot, especially seniors,” Hammond said. “We talk about not taking it for granted. They wanted the chance to defend their title.”

What made it even more difficult was that they didn’t even talk about this year’s title much because they were more focused on taking it one game at a time. That’s what Hammond said worked well last year and what they were hoping to do again this year.

But the main goal was to help the younger kids come a long and see how to be successful.

We didn’t really talk about winning the championship or that being a goal. We wanted to take it one game at a time. We realized a year ago, that’s how it happened. It was about creating a positive environment for girls after this year.

“We wanted a successful season to help show the younger kids,” Hammond said. “Westminster had a very, very good year this year in multiple female sports, which helped our seniors prepare to be leaders in soccer. Volleyball and basketball both had a lot of success. A lot of players learned leadership traits coming into senior season not just from me or soccer, but the dynamics of those other sports. That helped mold the seniors into leaders before the season.”

For last year’s hero in the state championship, it came as a disappointment to not get to finish out her last season because of the potential she felt like this team had to repeat.

“We kind of knew it was coming, but it didn’t really hit us until we were told ‘Hey, you won’t be playing high school soccer anymore,’” she said. “It was a soul crushing moment.

“We believe we could have gotten to where we were last year and we wanted to do it together, but more importantly, we wanted to usher in the younger players and welcome them to the Westminster soccer world. When you find out you can’t do that, it makes it even harder.”

But, White admitted there is a little less bitterness because of how last year ended.

“It definitely helped this year with what happened this year,” she said. “There was no promise of getting there this year. It still would have been nice, but no one made it. We are still defending champs.”

Early in the season, the team showed signs of being just as good or better than last year. An improved back line defensively, several returning stars and the addition of more goal scorers had the Knights set up for an exciting season and off to a 6-0-2 start and the No. 1 ranking in Class 1A-3A.

While we won’t see this year’s team get a chance to compete for another title, the 2021 team will return ready for its shot at the title thanks to the foundation that has been set by White, Hammond and many over throughout the last several years.