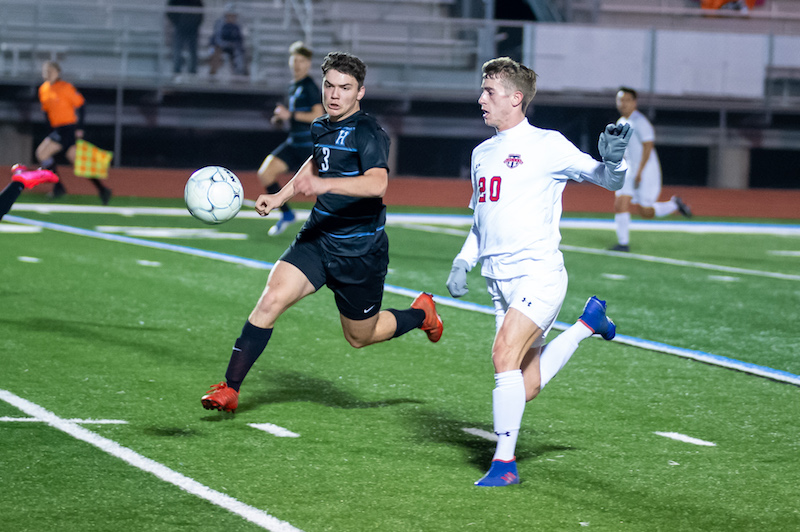 Thompson’s soccer team was off to an impressive start before the season had to be canceled on March 13 due to the spread of COVID-19. (For the Reporter/Larry Dancy)

ALABASTER – Control what you can control. It’s a mantra adopted by a number of coaches and motivational speakers too big to count, but it’s one that’s being put to the test in the new normal forced upon us by COVID-19, and that’s no different from Thompson head boys soccer coach Rusty Cowley.

When Cowley took over as a new, fresh-faced 23-year-old head coach, he never imagined the challenges he would face–leading the resurgence of the Thompson soccer program seemed a tall enough task.

Yet, just as his Warriors moved to a 13-1-1 record to start the 2020 season (one of the best in school history) the opportunity for a historic season was ripped from their grasp on Friday, March 13, due to the spread of the novel coronavirus.

“It’s just a gut punch,” Cowley said. “I was just so disappointed really for the seniors. Before we let out of school I let them know that they were going to have to be the examples for everyone else to follow. Their maturity was one of the biggest things that stood out about this group. Being willing to take it one day at a time and continuing to grind.”

Even in the midst of the initial shutdown there was a sense of optimism that even if the team lost a few games on the schedule there would still be time to potentially finish the season and achieve all the goals the team set out to accomplish.

“For it to be canceled, that was really disappointing,” Cowley said. “There was always that hope that we would delay and get back to normal later on.”

Thompson’s team featured eight seniors—five of which had been in the program since middle school. Many of them switched positions and fought for years for a spot on the varsity squad.

Years of toil, sweat and dedication wiped out in one fell swoop. Still, to watch that process and the evolution of his team was one of the most rewarding parts of the experience for Cowley.

“To see them develop over that time and talking about what we wanted this program to be like when these guys were freshmen and sophomores was this team’s goal,” Cowley said. “Last season I think was kind of a transition where this senior group were the young bucks but were very much so bought in to what we wanted to do.”

His upperclassmen almost single-handedly ushered in a new era for Thompson soccer, setting a new standard for others to follow and doing so with a team-first mentality.

“This group was one that had the talent but also had the right mindset whenever we were talking over the summer about what the offseason workouts would be in November,” Cowley said. “At one point we were going three times a week at 6 a.m. and they were all about it. It was one of those things where they asked for the additional work and we, as the coaching staff, held them to it so they were willing to do whatever it took to be successful and that selflessness combined with their talent is something I think that will set this group apart.”

That character was exuded in the sacrifice of this senior class and it started with the defense.

The Warriors’ back line produced nine shutouts in their 15 matches and allowed only six goals total on the season. Seniors Cesar Hurtado, Sy Garrett and Yourguen Rodriqguez all rotated in at defense and did so playing outside of their natural positions.

Garrett moved all the way from the forward position to help the team on defense and still managed to add two assists, while earning a spot at Huntingdon College.

Hurtado also scored four goals with two assists from his outside back position and committed to play for Birmingham Southern College in the fall.

Senior Tyrique Davis became the glue for the defense, a catalyst on offense and a guy Cowley counted on every night to perform, ending up with the team lead in minutes played and one of two Warriors to make the All-Metro First Team.

“Davis, our defensive center midfielder, did a great job controlling the tempo when we had the ball and could read the game so well and seemed to always put himself in the right place at the right time to win the ball back for us,” Cowley said. “He would wheel himself out of a hole where he’s got two or three guys on him in the closing minutes of some games that was huge.”

“He has been on varsity since his freshman year and is one of the hardest workers I’ve ever seen,” Cowley said. “He would finish practices with the varsity and rather than go home he would go to different parks and work on his skills on his own time.”

A great example of a player who fought through adversity to contribute on the varsity level was Konnor Fullford. Fullford exploded as a senior leading the team with 12 goals, while adding six assists.

“Konnor played center forward and really came on for us this year. He played on the junior varsity team his freshman and sophomore years, helped us on varsity last year and stepped up in the offseason,” said Crowley. “He has always had the ability to score and it was just a matter of confidence to put his chances away.”

Another was Nick Lowry who had been on JV his sophomore and junior year and always had the intelligence and just needed to translate it to the field.

It all clicked for Lowry this year as he came off the bench to score five goals with three assists.

Despite the current circumstances, looking forward to the future provides an encouraging view for the Thompson soccer program.

Cowley has seen the program participation increase nearly 50 percent since he came on, and the depth will be the least of his worries in 2021.

“It’s a great problem to have. The first year that I was coaching varsity at Thompson, I had maybe five upperclassmen. So to have 16 seniors is big, but we’re going to have to make some tough decisions because we have a lot of talent in our junior, sophomore and freshman groups,” he said.

Cowley will return several starters next year and knows this next team will have to carve out their own identity and find motivation from this lost season.

“We’ve got to move on at some point and whoever the team is next year that team hasn’t done anything yet so collectively they’ll have to reset and find that fire,” Cowley said.

With a solid foundation set and good habits put in place for his program, Cowley’s Warriors are poised to heat right back up for unfinished business in 2021.