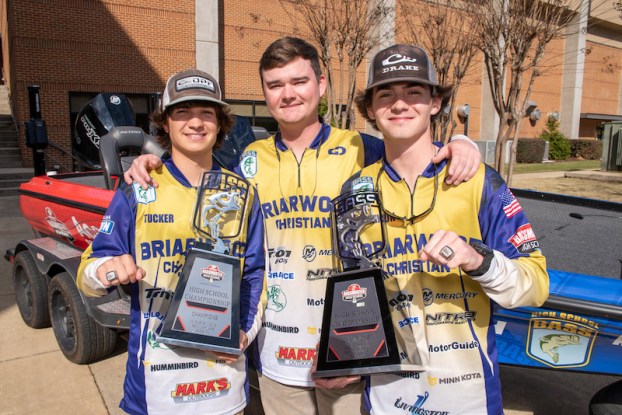 Briarwood’s Tucker Smith, left, was named a Bassmaster All-American for the second year in a row, making him one of the top 12 high school anglers in the country. (Reporter photo/Keith McCoy)

“The Bassmaster High School All-American program continues to be the most prestigious in the country,” said Bruce Akin, B.A.S.S. CEO. “And we appreciate Academy Sports + Outdoors support of this high honor.  Congratulations to the 12 All-Americans for this high achievement in recognition of not only your fishing skills, but also your scholastic, conservation and community service achievements.”

In addition to his win in the 300-boat field at the national championship, Smith has also earned eight top five finishes and 10 top 20 finishes this tournament season.

“At almost every weigh-in, anglers from other schools look to see how they finished compared to the ‘back-to back national champion,’ and I am so thrilled to see how complimentary and humble Tucker is in that role,” said Jay Matthews, Director of Athletics at Briarwood Christian School. “He has had great finishes since that designation and also had tough tournaments. Regardless, Tucker handles it with class and genuine interest in others.”

Smith is captain of the Briarwood Bass Fishing Team and has led his team in both fishing and conservation work building habitats on Lake Caroline in South Alabama.

He has also worked with Randy Howell’s King’s Home Project to take children at King’s Home fishing for a day and has reached out to Alabama Veteran with an offer to do the same for some of their members.

More than 300 applications nominating students in grades 10-12 were submitted from 33 states across the nation. Of these, 49 were chosen as Bassmaster All-State anglers.

After reviewing tournament resumes, conservation efforts, community service activities and recommendations from coaches and school officials, a panel of judges representing the sportfishing industry, media and conservation groups further narrowed the field to the Top 12 high school anglers in the country.

“Congratulations to these 12 young anglers who can now call themselves Bassmaster High School All-Americans,” said Hank Weldon, senior manager of the B.A.S.S. High School program. “This program is unlike any other in all of High School Fishing and each angler and parent should be very proud of this accomplishment. I look forward to celebrating their achievement at an upcoming Elite Series event.”

The team has been invited to participate in a special Bassmaster High School All-American Bass Tournament, which will be held in conjunction with an upcoming Bassmaster Elite Series event. Each All-American angler will be paired with an Elite Series pro for the one-day derby to be held on a nearby fishery.

By ALEC ETHEREDGE | Managing Editor It was a win like no other. After head coach Ken Headley passed away... read more