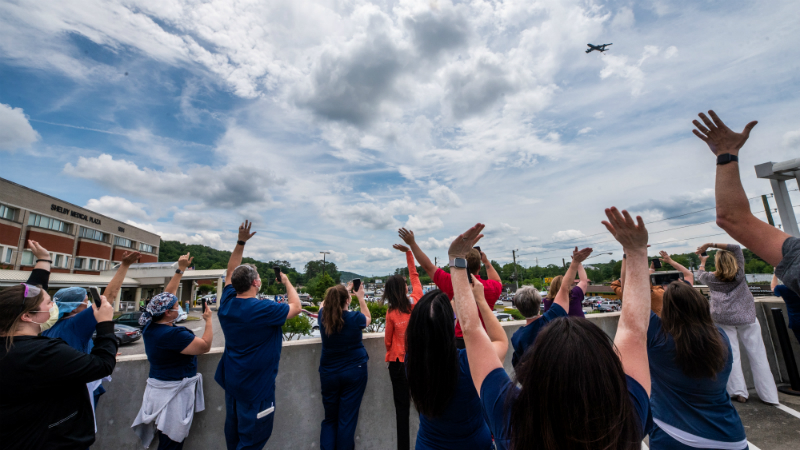 ALABASTER – Nurses, doctors and staff at Shelby Baptist Medical Center gathered at the top of a parking deck to watch an Alabama Air National Guard aircraft fly overhead on Tuesday, May 5, in a show of support for medical workers.

A KC-135R Stratotanker aircraft from the 117th Air Refueling Wing flew over Shelby Baptist and other hospitals in the Birmingham area as part of a nationwide Air Force Salutes Flyover under Operation American Resolve.

“The purpose of this flyover is to show appreciation to the thousands of American heroes who are at the frontline battling COVID-19 and providing the support that America needs,” read a press release from the Alabama Air National Guard. “It is part of a normal training mission and will demonstrate the continued readiness of the 117 ARW during this pandemic. The flyover is also intended to lift morale in Huntsville and Birmingham due to the severe health and economic impacts from COVID-19.”

Shelby Baptist CEO Daniel Listi said the flyover was a welcome gesture for workers who have had a difficult couple of weeks.

The hospital has taken on COVID-19 patients from local nursing homes, and recent orders to reopen some businesses have officials wondering what the next couple of weeks will entail.

“That makes us nervous because we still have to see what that means,” Listi said.

It took and landed in Birmingham, refueled F-16s out of Montgomery and flew for about four hours, according to Maj. Jonathan M. Russell, director of Inspections for the 117th Air Refueling Wing.

Briarwood’s Smith named All-American for 2nd year in a…