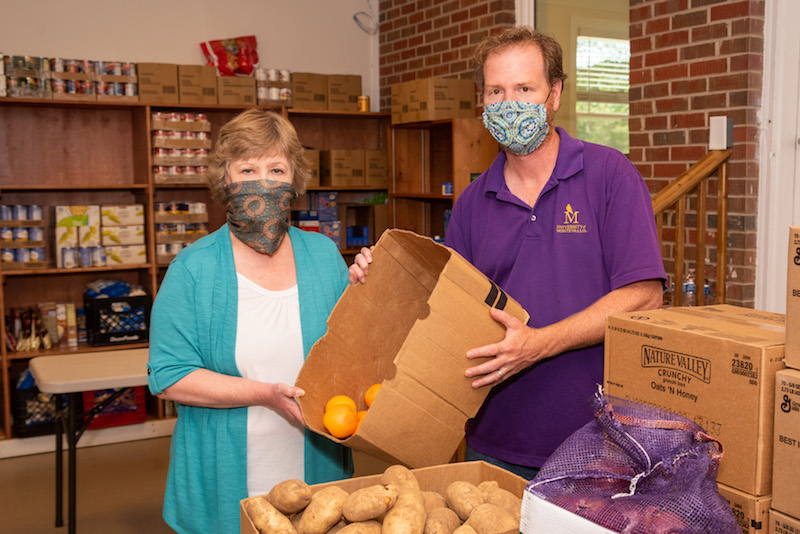 MONTEVALLO – Karen Pendleton and her team at Shelby Emergency Assistance work throughout the year to provide support for people in crisis, but in the last two months, they have seen an increase in calls for assistance amid the COVID-19 pandemic.

For Pendleton, the organization’s director, the recent influx of calls reminds her of 2008, when the country was experiencing an economic recession.

“That was my first year as executive director here,” Pendleton said. “What a start. We had days when there were many calls. We were so overwhelmed, but this is bigger.”

But SEA also has seen an increase in contributions from other organizations that have ensured Pendleton and her team can continue to meet people’s basic needs.

In April, the University of Montevallo’s dining services offered to donate to SEA a surplus of fresh produce that would have been served in UM dining facilities if COVID-19 had not prompted the university to change to a distance education model.

Jason Quarles, director of dining services for Falcon Foods/Chartwells, delivered the first shipment of vegetables, fruits and other produce items to SEA in early April.

Since then, he has delivered two more shipments of items, including sweet potatoes, purple onions, melons and tomatoes.

“In our pantry, we have frozen foods and canned or packaged things, so whenever we have access to fresh food, it’s certainly well received by clients we serve,” Pendleton said. “We have given produce out to at least 30 households. The largest family we’ve served had 12 people in the household.”

In addition to UM’s contributions, St. Thomas the Apostle Catholic Church, Church of the Highlands and others have donated hygiene items to SEA.

United Way and the Community Foundation of Greater Birmingham have helped SEA with additional funding, which allows the organization to provide financial assistance to clients for rent and utilities, Pendleton said.

SEA closed its office to the general public in mid-March as a precaution, but has continued to serve clients and receive donations dropped off outside the building.

“It’s amazing,” Pendleton said of the continuous donations that have come in during COVID-19. “There will be bags and boxes of stuff waiting for us to bring into the pantry.”

Pendleton praised the community for its continued support of SEA in a difficult time.

“We couldn’t do it without them,” she said. “We are so fortunate to have this agency here in Montevallo. It’s such a caring community.”