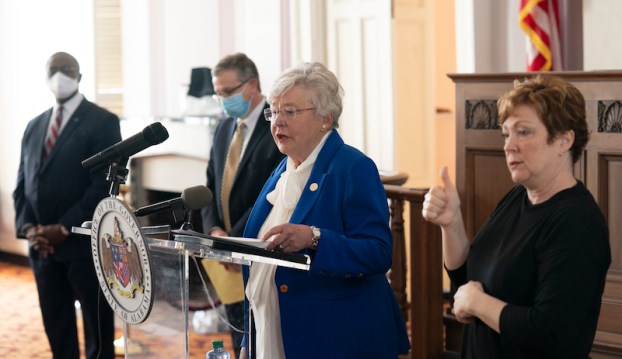 MONTGOMERY – Alabama Gov. Kay Ivey announced the next phase of the state’s reopening plan at a press conference on Friday, May 8, which brought good news for many businesses.

During the press conference, Ivey announced a continuation of the state’s current safer-at-home order, but with an amended version that goes into effect on Monday, May 11, and will last until May 22.

“Starting this Monday, May 11, this order is amended with expanded openings that will go into effect during the next phase of safely reopening Alabama and will continue until May 22,” the governor stated.

The next phase of reopening included restaurants, bars and breweries, removing the limit of 10 people or less to a non-work related gathering, the opening of athletic facilities, the opening of close-contact services and a removal of limitations on beach gatherings.

“Because I know how the people of Alabama are responding, Dr. (Scott) Harris (State Health Officer) and I are comfortable that we’ll be able to continue a measured approach,” Ivey said. “But let me be crystal clear, the threat of this disease continues to be active and it is deadly.” 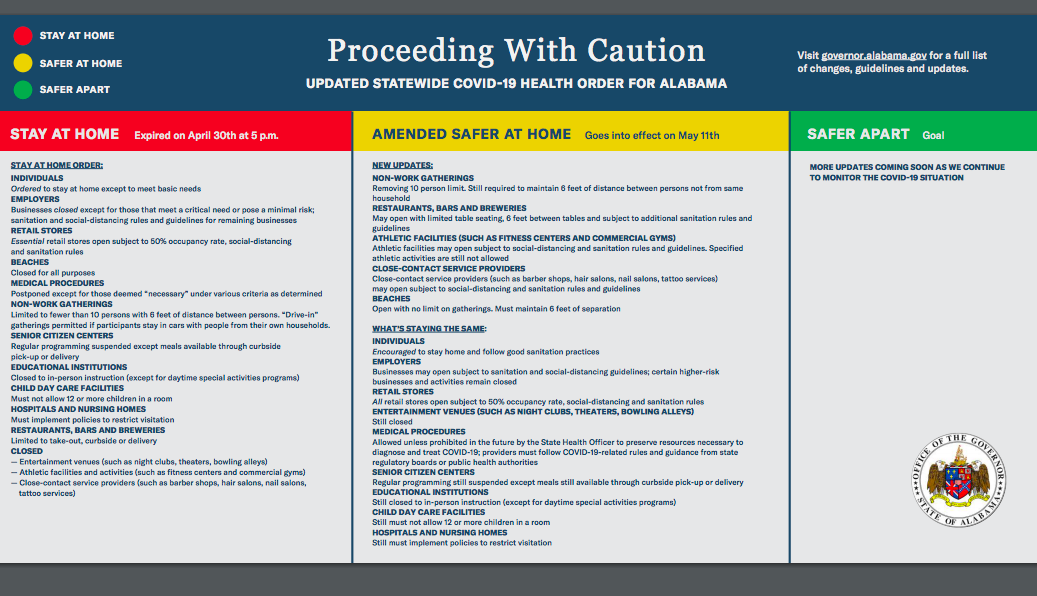 The amended order from Gov. Ivey.

With the amended order, restaurants, bars and breweries will now be able to open at 50-percent capacity, but there must be 6 feet between tables and sanitation rules and guidelines must be strictly followed.

Close-contact services like barbershops, hair salons, nail salons, tattoo parlors and others can resume business with similar guidelines, making sure that social distancing is practiced and proper sanitation rules and guidelines are followed.

Employees at each business must wear a mask according to the new order.

“Today, more than 400,000 people are unemployed,” Ivey said. “These are innocent people that have lost their jobs, and for many, they are accepting government help for the first time in their lives. People are frustrated. I understand. I care about you. We hear your voice and today’s order will hopefully begin providing another round of hope for all of us.”

This move by Ivey comes after more people filed for unemployment in the last six weeks than the previous two years combined.

Churches will also be allowed to reopen to public meetings with pastors making the decision on how and when to do so, but Gov. Ivey and Dr. Harris urge to do so safely.

“We certainly want people to get back to their normal worship as soon as possible, and yet please remember to make that as safe as possible for those people who are at risk,” Harris said.

Athletic facilities such as gyms and fitness centers can also open again at 50-percent occupancy, including athletic classes in those facilities, as long as strict sanitation rules and social distancing are followed.

Sports that involve interaction with another person closer than 6 feet, activities that require use of shared sporting apparatus and equipment and activities on commercial or public playground equipment still remain closed.

There is also no longer a limit to non-work gatherings or how many can gather at the beach, as long as a proper social distance of 6 feet is put between each individual.

Ivey said little league teams, entertainment venues and concerts  are all part of what makes a summer so enjoyable and special in Alabama.

“Our folks and Dr. Harris’ team are continuing to work today and throughout the coming days to give additional details and guidance to these other vital businesses and sports,” she said, adding that she hopes to have the next phase ready by around May 13, which would be two months since the virus first started in Alabama.

The amended order from Ivey comes with 353 confirmed cases of COVID-19 in Shelby County with 17 deaths, while the statewide numbers have reached 9,188 confirmed cases and 374 deaths.

By ALEC ETHEREDGE | Managing Editor As we near the two month mark of the COVID-19 battle in Alabama and... read more