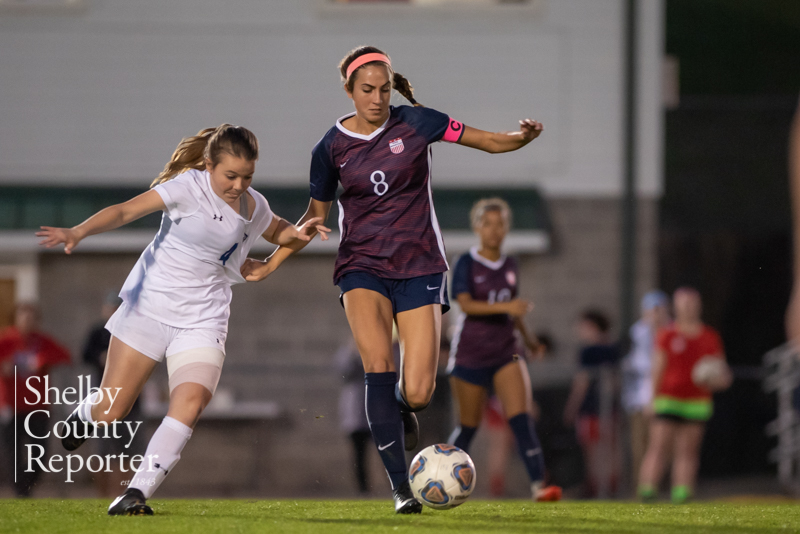 Oak Mountain's Danielle Retief was off to an incredible start to the 2020 soccer season and was one of many to earn a spot on the All-County girls soccer team. (Reporter photo/Keith McCoy)

With No. 1 teams in three of the four different classifications, the 2020 girls soccer season in Shelby County was set to feature an exciting finish.

In addition to that, Spain Park and Pelham were both ranked, while others were having their best season in a while.

While we won’t get to see the season unfold, we can honor the players for their work during a hard-fought 2020 campaign, and that’s what we’ve done on the 2020 All-County girls soccer team featuring the best players and all seniors.

Forward: Danielle Retief, senior, Oak Mountain. On pace to be one of the state’s best players this year, Retief scored 29 goals and had eight assists in the shortened season.

Forward: Kailey Littleford, senior, Chelsea. In 10 games, Littleford scored 11 goals and had six assists for the No. 1 Hornets, and was part of a dominant one-two punch.

Forward: Haley Duca, junior, Chelsea. The other part of the strong forward duo at Chelsea was Duca, who posted nine goals and an impressive nine assists early in the season.

Forward: Morgan White, senior, Westminster at Oak Mountain. Last year’s hero in the state championship, White was off to another strong start with six goals and four assists early this season.

Midfield: Morgan Bright, senior, Chelsea. One of the most versatile players on Chelsea’s team, Bright can attack or play back. She posted four goals and one assists this season.

Midfield: Katie Hoaglund, senior, Westminster at Oak Mountain. Hogalund had nine goals and four assists early in the season and was set to be the leading scorer this season for the Knights. She’ll be playing at Samford next year.

Midfield: Taylor Davis, junior, Helena. A crossover forward and center midfield player, Davis was as dominant an offensive player as any this year with 20 goals and 13 assists. Even with a shortened junior season, she already has 95 goals with the Huskies.

Defender: Kaitlin Maynard, junior, Oak Mountain. A captain and defensive star, Maynard was part of a defense that gave up just seven goals and had eight shutouts in 14 games.

Defender: Kierson McDonald, freshman, Oak Mountain. McDonald still has time to develop, but joined Maynard as a leader of the back line as a freshman. She also sparked offense with five goals and eight assists.

Goalkeeper: Mackenzie Titus, junior, Chelsea. An All-County goalkeeper last year, Titus had 15 saves and two shutouts this season and was set be a key piece for Chelsea’s playoff run.

Forward: Anna Martin, junior, Briarwood. With a tough schedule, Briarwood’s girls struggled early in the season, but lost several close games, while Martin was the main key offensively with 12 goals and five assists in nine games.

Forward: Sunni Graber, senior, Thompson. Graber totaled 15 goals and seven assists this season, and as a senior captain, she helped the program take another step in the right direction.

Forward: Michelle Hernandez, senior, Pelham. With 10 goals and three assists, Hernandez was on pace to match her impressive junior season with a strong final year at Pelham.

Midfield: Marjorie Kingsmore, junior, Helena. Kingsmore had 11 goals and five assists this season and was another key to the Huskies having a strong start.

Midfield: Molly McNulty, senior, Spain Park. A North-South All-Star last summer, McNulty was one of many on a consistent Spain Park team to make a difference for the Jaguars.

Defender: Ella Davenport, freshman, Westminster at Oak Mountain. Westminster gave up a combined four goals in eight games this season, including no more than one in any game and four shutouts, with Davenport being the leader of the unit.

Defender: Berkley Barnett, junior, Briarwood. A three-year starter on defense, Barnett led the back line that gave up two or less goals in five of eight games.

Goalkeeper: Mary Catherine Griffith, senior, Westminster at Oak Mountain. With her four shutouts, the starting keeper back from last year’s state championship team was off to a strong start and allowed a combined four goals this season against a tough schedule.