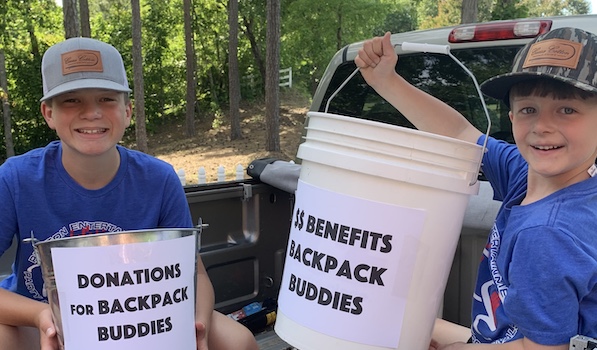 Local DJ cruises through Columbiana for a cause

“Little towns can do big things when we all work together,” Renee Wilder said.

Wilder, the bookkeeper at Elvin Hill Elementary School, also works with her church, Four Mile Baptist, to provide some of the food for a food insecurity ministry called Backpack Buddies.

Backpack Buddies is a program through Vineyard Family Services that works through churches and other organizations to provide food-insecure school children with enough nutritious, easy-to-prepare food to eat over the weekends.

Wilder’s church commits to sponsor 10 children a week, as do other churches all over the county. Together they make a difference.
When the COVID-19 epidemic began to close things down, many who worked with Vineyard Family Services wanted to make sure that Backpack Buddies not only continued, but also had enough to provide for families that may be feeling the economic pressure of losing jobs during the crisis.

The faculty and staff of the five schools in the Columbiana district have been keeping tabs on such needs, and currently, 200 bags a week are being passed out. That’s a lot of food that needs to be acquired on a weekly basis.

Ricky Ruston, husband of Elvin Hill teacher Lauren Ruston, came up with an idea to help bring in more food and funds to feed those in need.

Ricky has had a DJ side hustle called Ruston Entertainment for several years. It occurred to him that he and his wife could do something to lift spirits of those stuck at home and perhaps help out the Backpack Buddies program at the same time.

He decided to create a rolling DJ parade to collect donations through town on May 1.

Ruston advertised his plan on Facebook for several days before he took to the streets and had the cooperation and help of Mayor Stancil Handley and the Columbiana Police Department, who acted as escorts for his “parade of one.”

“We hooked up a trailer with my equipment and a generator and started out in the Hidden Hills subdivision and continued through town playing music and taking donations for the Backpack Buddies for an hour and a half,” he said.

It was a dance party on wheels that made everyone happy to get out of the house for some fun, but safely, and that made them happy to give.

Ruston’s goal was to raise $250 to $500 for the program. His two sons, who rode with him holding five-gallon donation buckets, collected cash donations. He also was set up for online donations.

By Sunday, they had raised over $1,400 in gifts and had put together 245 Backpack Buddies for kids in the community.

“I’m married to a teacher and didn’t even know about Backpack Buddies until we were all in quarantine,” Ruston said. “I really encourage folks to seek out opportunities inside their very own communities during this time. Everyone needs a little extra help these days.”

To help with the ongoing effort to feed food-insecure families in the Columbiana area, you can visit Facebook pages for any of the following groups. Vineyard Family Services, Ruston Entertainment, or Backpack Buddies. A list of food donation needs, in particular, can be found on the Backpack Buddies Facebook page.

By SASHA JOHNS / Community Columnist During World Wars I and II, our grandparents and great-grandparents all over the world... read more