New chief: Calera PD will be tough on crime, focus on service

CALERA – New Calera Police Chief David Hyche may be new to the position, but he is very familiar with law enforcement and Shelby County. 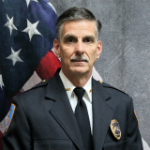 Hyche began Monday, May 4, the same day his appointment was approved by the Calera City Council after a 30-plus career with the Bureau of Alcohol, Tobacco, Firearms and Explosives.

For about the last 21 years, Hyche and his family have lived in Shelby County.

“When I started looking for a job, I wanted to stay and keep my family in Shelby County,” Hyche said. “We would not even consider leaving Shelby County for another job.”

Hyche was previously over the ATF’s Alabama offices.

A native of Northport, Hyche got his start in law enforcement as a dispatcher with the University of Alabama Police Department in 1987. While in graduate school at UA, he was offered a post with the ATF in Atlanta.

Hyche replaces Sean Lemley, who retired from his job as police chief.

The most significant difference with his new job is that it will not focus solely on violent criminals as was the case with ATF.

“That’s really all we did. In one week, this is already much more diverse. With ATF we had few encounters with the public that were positive, but now most are. There’s a lot of service-type things we do,” Hyche said and gave examples including helping stranded motorists and controlling traffic during funeral processions. “I like having the positive interactions.”

Hyche said the department under his leadership will be committed to serving the public.

“We’re going to be tough on serious crime, but we’re also going to be a service-oriented department,” he said.

Hyche said the Calera Police Department will actively communicate with residents through social media, including its Facebook and Twitter pages.

FROM STAFF REPORTS ALABASTER – The Alabaster YMCA will host a blood drive on Tuesday, May 12, intended to help... read more