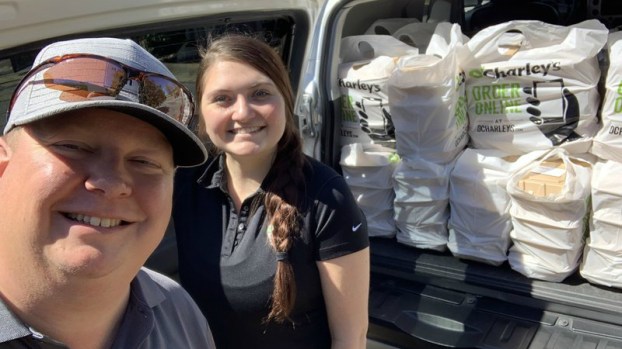 ALABASTER – The Alabaster O’Charley’s helped deliver about 20 meals to the Alabaster Police Department on April 30 as part of the company’s Hometown Heroes effort.

“Hometown Heroes is all about saying thank you to the brave men and women who are on the frontlines fighting this virus,” O’Charley’s Operations Director Kevin Musick said. “We are honored to give back to all those who are working hard to keep our community safe during this unprecedented and difficult time.”

The Hometown Heroes initiative is intended to recognize and support healthcare workers along with first responders on the frontlines of the battle against COVID-19.

The company’s first step to recognize these workers was to offer a 25-percent discount, followed by the creation of the Hometown Heroes initiative.

“The brave men and women who are working tirelessly on the frontlines at this challenging time deserve our support and respect,” said Craig Barber, O’Charley’s CEO. “Whether it’s providing free meals at their work or providing a discount so they can affordably feed themselves and their families, we want them to know how thankful we are for them.”

“At O’Charley’s, we live by the mantra ‘do good by serving.’ It is an honor to use the collective energy and commitment of our team to support these incredible heroes as they continue to fight this virus and its impact.”

For healthcare workers and first responders to receive the 25-percent discount, they should call their local O’Charley’s store, place their order and then show proper identification to an O’Charley’s team member when picking up their food.

O’Charley’s stores are open for business, providing to-go, curbside, and delivery options. Customers can order online at order.ocharleys.com and simply pull-up to the restaurant where their food will be brought to their car.

Also on April 30, meals were delivered to UAB Hospital (about 120 meals) and the Warrior Fire Department (20 meals), with help from the Fultondale O’Charley’s.

Team members drove their own cars to the locations to make the deliveries.