One year later, Briarwood won’t get chance to repeat 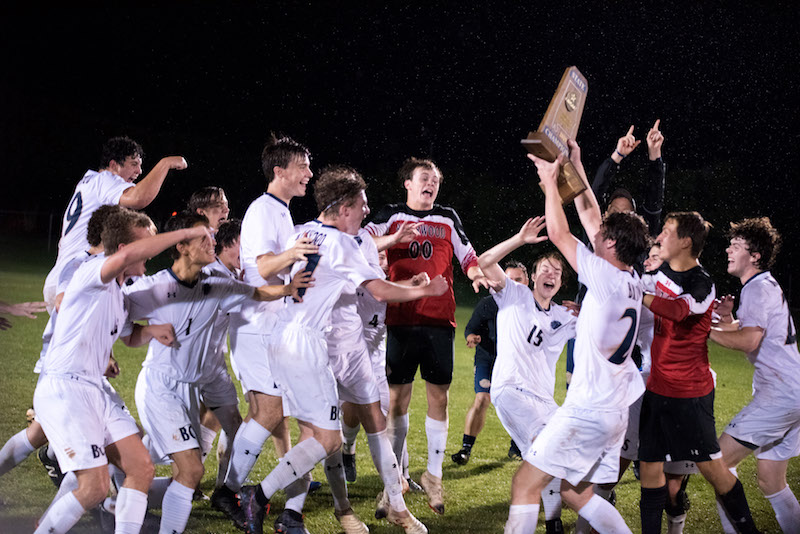 One year after claiming the 2019 state championship, Briarwood won’t get the opportunity to do so again this year due to the season ending abruptly almost two months ago. (Reporter photo/Keith McCoy)

The 2020 season never felt normal for the Briarwood boys soccer team. Head coach Shawn Brower had faced hard times at BCS before, and now as the leader of what has become a powerhouse program, he would have to keep his troops together again.

“We started out the season the second-most injured we’ve ever been on the team,” Brower said. “We just really struggled at the beginning, one injury after another, to the point where it was difficult to field a team.”

Those words echo back to when Brower first arrived as a new principal five years ago at Briarwood. The soccer program was nearly ended as the number of players had dwindled into the single digits and the varsity, junior varsity and even middle school teams had to share players just to continue the season.

Unbelievably, the Lions won the area championship that year behind two freshmen superstars in Brower’s son, Josh, and Logan Frost.

Brower and Frost went on to become cornerstones in a program that had all of a sudden become one of the elite in the state of Alabama. Over the next four years the Lions piled up 69 wins, three area championships, two state runner-ups and were finally vindicated with last year’s state championship to redeem the crushing losses in previous championship games.

The loss of Frost (64 goals and 47 assists in his junior and senior years) was certainly a blow to the Lions’ chances in 2020, and even more doubt crept in when the injuries started to pile up, putting their title defense odds in question.

“We started getting guys back, we weren’t quite up to full strength, but we were close,” Brower said. “We still didn’t have (senior midfielder) Bailey Morman who was an All-State player last year as well.”

Down Frost plus Morman (10 goals, seven assists in 2019), the outlook was bleak. The Lions were also approaching a stretch run of other state powers.

Brower had to get his guys to believe.

“I said ‘Listen, this schedule is built to get you ready for the playoffs and we’re not at full strength, but here we go. We had a couple losses we weren’t expecting, but if we could get a couple of these or run the table it’d make a statement that we’re back to form,’” Brower recalled.

In short, the Lions responded.

First, they took down 6A No. 3 Chelsea 3-2, next was 6A No. 1 Pelham 2-1, and then came an incredibly guts performance to pull off an incredible 3-2 overtime victory against 4A-5A No. 1 Indian Springs.

Less than a week after what would turn out to be their final win over Montevallo on March 9, the AHSAA suspended play due to the spread of COVID-19. Then, less than two weeks after that, spring sports were canceled and schools were told to finish academics at home.

Now, on the one-year anniversary of Briarwood claiming the state championship on May 9, 2019, the Lions don’t have the opportunity to defend the Class 4A-5A title, despite showing they had the potential to do so the week before the season ended early.

“It’s a sad time,” Brower said. “I know a lot of teams around the state, whatever the record in all the sports, there is a sense of loss. Not just the games and the playoffs, but the biggest loss is the brotherhood.”

Briarwood’s most heralded senior class—many of whom joined the team in eighth grade—held this program together and built a juggernaut. It doesn’t seem like a fitting end to a group who was rounding into form at the right time.

“I honestly don’t know Briarwood soccer without them,” said Brower, who will have to start a rebuild in the offseason. “They did have sights on a back-to-back, but they’ll be lifelong friends and be in each other’s weddings. The wins and the games fade, but it’s the relationships that are enduring.”