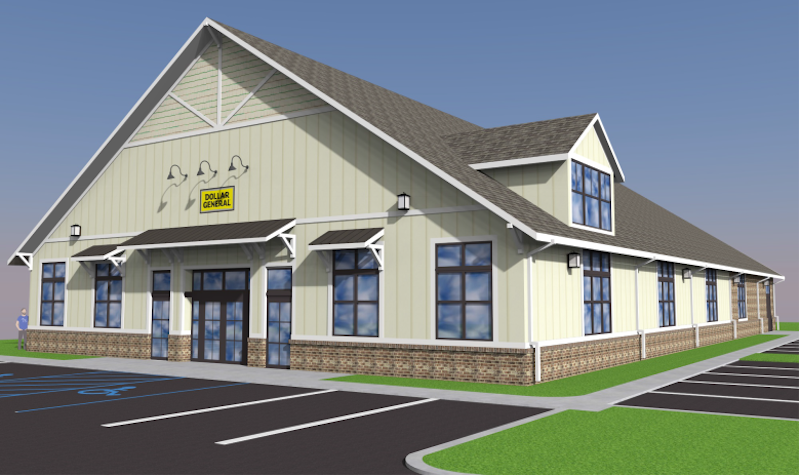 The Montevallo City Council has delayed a decision on the site plan for a new Dollar General retail store proposed for the city’s Scenic Corridor Overlay District on Alabama 119. (File)

Following public hearings for each proposed store May 11, the council in its regular meeting approved the plan submitted by The Broadway Group for a new Dollar General store at 110 Alabama 25 to replace the store currently located in the shopping center with Lucky’s Supermarket.

The council did not vote on another plan submitted by The Broadway Group for a proposed Dollar General store in Montevallo’s Scenic Corridor Overlay District on Alabama 119, after councilmembers voiced concerns about the plan not including the addition of a turn lane to the stretch of two-lane roadway in front of the site, as well as the yellow color proposed for store’s signage.

Alyssa Carter with The Broadway Group said the company has received a permit from the Alabama Department of Transportation for work on the 119 store’s driveway entrance, but ALDOT did not mention anything about a turn lane during the six-month review process for the project.

Kristine Goddard said ALDOT did not require a traffic study at this location based on the trip generation.

Matthew Burgess, the city’s engineer, said ALDOT has jurisdiction over turn lanes on Alabama 119 because it is a state-maintained road.

“During our initial review of The Broadway Group’s plans, I did go through an analysis based on the access management manual, as far as how you get in and out of any frontage property,” Burgess said. “This development did not generate enough traffic to warrant a right turn lane or left turn lane. At that point, I deferred the remainder of the review because it is ALDOT’s jurisdiction on the design of the right-of-way to the office.”

In light of councilmembers’ questions about a turn lane, Mayor Hollie Cost asked Burgess to work with Carter on connecting with an ALDOT representative to provide the council with more information about that aspect of the project.

The council also listened to public comments about the proposed 119 store, which has met opposition from many community members in the last few months.

Jim Farris, a scenic corridor resident, submitted a letter to the mayor and City Council members expressing his concerns about how city leaders have handled the project regarding the following: the delayed release of minutes from the Arbor and Beautification Board’s December meeting, in which the board approved the landscape plan; the question of what “neighborhood market” means relative to the city’s zoning ordinance, and whether a professional report will be done; the lack of a turn lane in the project plan to account for increased traffic to and from the proposed store; the Design Review Committee’s discussion without a quorum in an April 14 meeting; later revisions to the landscape plan and when the Arbor and Beautification Board would have approved them; the yellow color Dollar General wants to use on the monument sign conflicting with the Scenic Corridor Overlay District’s color specifications in the zoning ordinance; and storm water runoff and its impact on the surrounding area, particularly the Heritage Trace subdivision.

“I, or any of my neighbors who have expressed our opposition to this project, would agree with the right of the Broadway Group (BG) or Dollar General Corporation (DG) to seek to build this store,” Farris wrote. “We only want them to comply, totally, with the Montevallo Zoning Ordinance for the Scenic Overlay District.”

Melanie Poole, a Heritage Trace subdivision resident and employee of the American Village Citizenship Trust, also wrote a letter to the mayor and council detailing her concerns with the handling of the proposed 119 store project, and the project itself.

Poole echoed Farris’s concerns about the delayed release of the Arbor and Beautification Board’s December meeting minutes, the need for a professional market study to determine whether the Dollar General store meets the criteria in zoning ordinance, the store’s storm water runoff being directed into the Heritage Trace detention pond and the yellow color of the monument sign conflicting with the Scenic Corridor Overlay District specifications.

“Personally, I strongly feel that a Dollar General store is incompatible with existing properties in that area of Highway 119, which include three beautiful subdivisions as well as The American Village,” Poole wrote. “Montevallo is so blessed to have The American Village, the Alabama National Cemetery, a beautiful new city park, and a much-improved downtown business district. I really think it’s a shame to diminish the scenic corridor with a Dollar General.”

Heritage Trace resident George Henry urged the council to consider that the 119 store site is zoned B1 and Special District.

“That is the only section in town, other than one other parcel, that is B1. That is also the only section in town that is B1 and Special Overlay District, so that is a pretty unique justification in differentiation on those matters,” Henry said. “I would like to ask the council to please consider looking at that district as a district. I think that would help potentially frame this conversation around ingress, egress, those type of things.”

Henry also asked the council to consider revisiting the wording of the ordinance, and added, “I’ve never been an advocate for or against the development itself. I’m standing before you just because I believe that it was written in a way, for whatever reason it was written, to be pretty restrictive.”

Adjoining land owner Nathan Stamps said he annexed the property into the city many years ago as gateway commercial property, before the Scenic Corridor Overlay District was established, and believes the Dollar General store will be beneficial to the city for tax revenue and business.

The site plan for the 119 store underwent revisions and was approved by Montevallo’s Design Review Committee and Planning and Zoning Commission before going to the City Council for consideration.

A date has not been set for the 119 store’s site plan to come back before the City Council.

In other business May 11, the council: