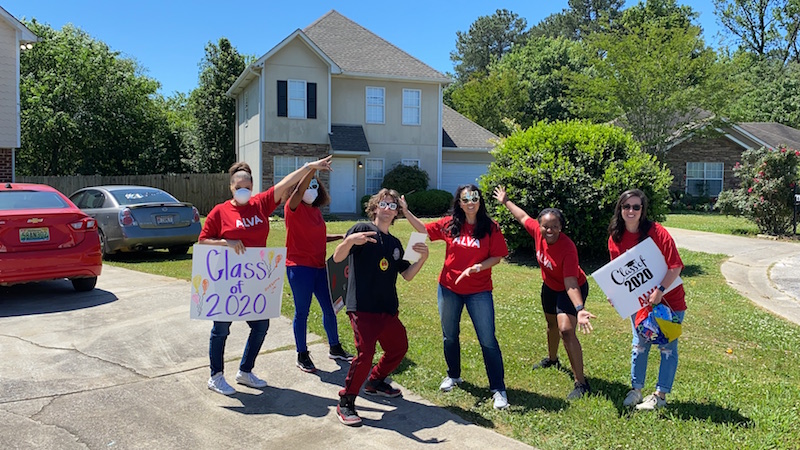 The Alabama Virtual Academy, an online high school, surprised its graduating seniors by bringing a motorcade around the state to celebrate the accomplishments of the students. (Contributed)

The Alabama Virtual Academy, an online high school, surprised its graduating seniors by bringing a motorcade around the state to celebrate the accomplishments of the students.

ALVA had originally planned to hold an in person graduation ceremony and prom on May 8, but like traditional schools they had to change their plans due to the COVID-19 epidemic.

“I had a lot of parents and seniors call me upset that they wouldn’t be able to have a ceremony, so I wanted to at least do a virtual graduation” said ALVA Principal Valerie Staten. “But we just felt like that wasn’t enough, so we put our heads together and searched the internet and saw other schools had done something like this.”

“These kids rarely get to see their classmates in person and we knew they had already purchased their caps and gowns. We wanted to give them an opportunity to wear them and be recognized by the school as graduates,” said Student Support Advisor Lisa Smith.

The school had 71 graduating seniors all across the state, including a few in Shelby County, and they made an effort to visit all of them that were interested to make them feel special.

Included in these stops was Andrew Middleton of Calera, who excitedly waved and greeted the motorcade as it passed by his house.

“Our purpose was to make sure that our students understand that we love them, we care about them and we have not forgotten them,” Staten said. “We just wanted to give them back the things they lost because of the epidemic.”