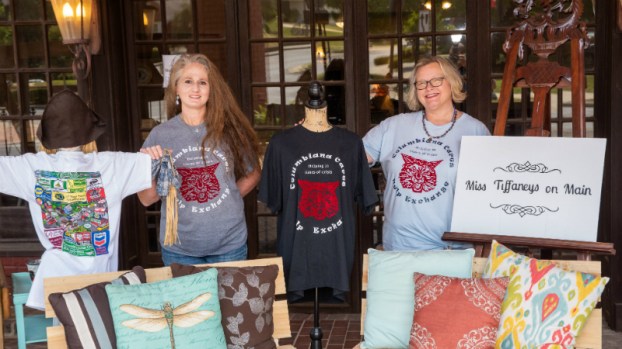 New Columbiana store will operate with community in mind

Miss Tiffaneys on Main will open June 1 at the historic building located at 112 Main Street in Columbiana, according to Tiffany Anderson, who is co-owner of the business with Tiffney Hester (the two combined their names to form the spelling of the shop).

Miss Tiffaneys will contract will local artists and crafters to sell their goods, but the business will promote the community in other ways—mainly through its support of the Columbiana Cares Help Exchange, which is another Anderson brainchild.

A registered nurse, Anderson and her son moved back home to the Columbiana area from Orange Beach back in October 2019, with a plan to go back to school to become a legal nurse assistant.

Then around mid-March, as the COVID-19 pandemic was coming to the United States, Anderson said she knew there would be people in need, and she wanted to be able to help.

The Help Exchange was the result of a brainstorming session with friends.

In about six hours of its formation as a Facebook page, 800 members had joined the group, and there were more than 1,000 by the end of the next day.

Columbiana Cares Help Exchange now has almost 1,500 members. Those in need can post directly on the page or message administrators. Members also share needs they know about and connect with others able and willing to help.

“The need was there to do something in the community,” Anderson said. “The idea was to barter and network, and it grew from there. We’ve helped feed hundreds, maybe thousands of families, along with churches and food pantries.”

A few weeks later, Anderson became aware of people dumping unwanted pets during a time the Shelby Humane Society facility was closed. So, she used the network that had already been created through the Help Exchange to form a pet pantry.

Jennifer Robertson leads that effort and works with the Birmingham Humane Society, which treats the local pet pantry as a rescue organization.

The Help Exchange has benefitted the community through efforts like providing assisted living facilities with supplies to throw parties, making masks for healthcare workers and performing home repair work for elderly residents.

Toward the beginning of the Columbiana Cares Help Exchange, Anderson put out a call for crafters for a fundraising telethon. More than $900 was generated, and Anderson came away with an idea for a business that could be profitable while helping artists and donating 5 percent of proceeds to the Help Exchange as part of a social entrepreneurship model.

Tonya Jones helped Anderson flesh out the idea and let her know about the availability of the former Masters General Store location, which owner Mayor Stancil Handley offered at a discounted rate because of the nature of the business. It was all a little much for Anderson to begin with.

“I said, ‘I don’t know anything about running a business, I’m a nurse!’” Anderson said.

The building will offer Anderson and Hester flexibility, with plans for a clothes closet, food pantry, pet pantry and a room that could be dedicated to counseling services or interviewing people about needs to be met by the Help Exchange.

The store will be open from 8 a.m. to 6 p.m. Tuesdays through Saturdays, and the occasional Monday.

“God has been opening every door,” Anderson said. “Nothing has been hard about this. It’s really turning into a collective of people who want to help each other and help the community.”

Seniors pick up caps, gowns, walk the hallways of PHS one last time

By BRIANA H. WILSON | Special to the Reporter PELHAM – Pelham High School seniors are one step closer to... read more