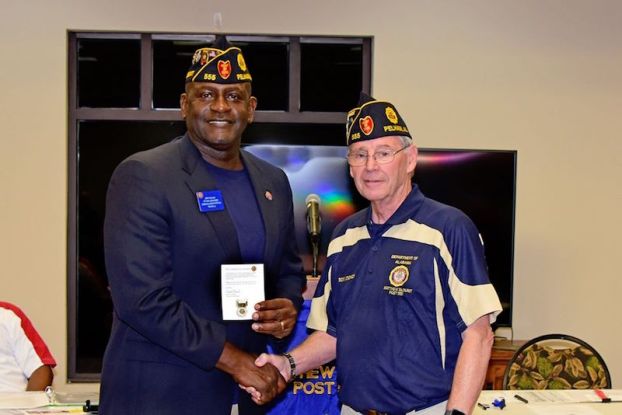 PELHAM — Comrade Jerry McClain received the Legionnaire of the Year Award from The American Legion on behalf of Matthew Blount Post 555, in recognition of his hard work and dedication during the 2019-2020 Legion year.

Annually, at the end of the post commander’s tenure, he or she presents one member with this prestigious award.

During The American Legion Matthew Blount Post 555 Annual May meeting on May 7, outgoing Commander Kenneth Paschal announced Comrade Jerry McClain as the Post 2020 Legionnaire of the Year.

“Self-motivated, team player, independent post member, go-getter summarizes Jerry McClain,” Paschal said. “Comrade McClain is the epitome of what being a Legionnaire and a member of The American Legion is all about.”

His American Legion education during the 2019-2020 Legion Year includes:

Some of McClain’s achievements and significant accomplishments are listed below:

The American Legion Matthew Blount Post 555 is always looking for veterans who would like to be part of the organization. All interested veterans who served from Dec. 7, 1941, to the present is invited to visit ALPOST555.com.  Also, all current active duty military are eligible for membership.