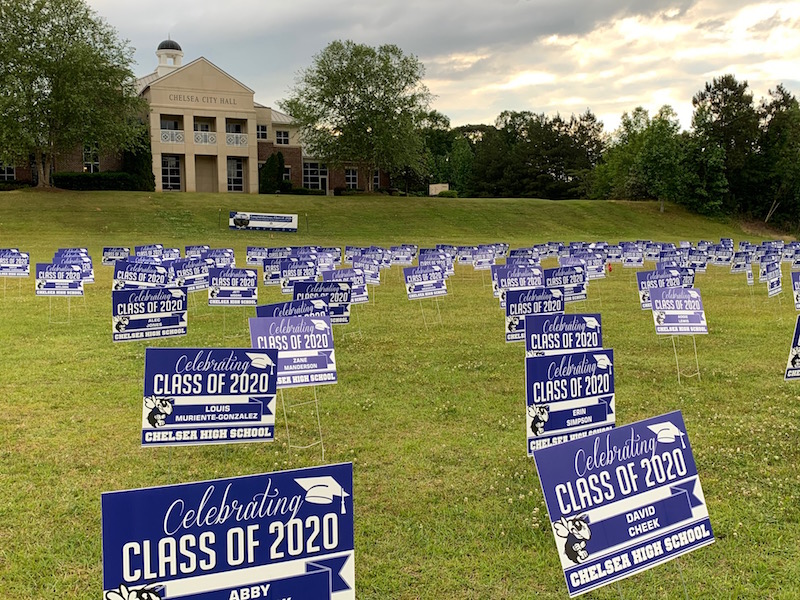 The Chelsea City Council approved the purchase and placement of signs honoring the members of the Chelsea High School Class of 2020 in front of City Hall. (Reporter Photo/Emily Sparacino)

CHELSEA – The Chelsea City Council on May 19 approved a resolution authorizing improvements to be made at two of the city’s ballparks on Shelby County 39 and Shelby County 47.

With phase two of construction at the city’s new sports complex off Shelby County 11 ongoing, city leaders saw the need to make upgrades and repairs to the other two ballparks, Mayor Tony Picklesimer said.

The city has budgeted about $20,000 for the ballpark improvements, which will include aluminum bleacher tops, backstop net poles, a new batting cage, repainting dugouts and sodding around the fields, according to Picklesimer.

“We look for those things to get underway very soon,” he said.

The council also approved a resolution to declare property at 172 Chesser Drive as surplus and to authorize the mayor to sign a lease agreement for it.

The building is located next to Chelsea Fire & Rescue Station 31.

“Our intention for that building is to be something that will enhance the restaurant row in our entertainment district,” Picklesimer said. “We have had somewhat of a cleanup facelift done to it, and we will be leasing it to one or our existing businesses that is opening up a new line of business for a short time. They need it on a temporary basis while they’re securing additional facilities for their business.”

The council also approved an ABC license application for retail beer and wine for Samarth LLC, the new owner of the Chevron station and Huddle House on U.S. 280 in Chelsea.

In his mayor’s report, Picklesimer extended a “hearty congratulations” to the members of Chelsea High School’s Class of 2020.

The City Council at its previous meeting approved to purchase yard signs to display in front of City Hall in honor of the graduating seniors.

Picklesimer thanked the group of parents who helped place the signs on the City Hall lawn prior to May 19, which the council proclaimed as Chelsea High School Class of 2020 Senior Day.

The Shelby County Board of Education provided the congratulations banner displayed behind the signs, each of which features a senior’s name.

“It’s really a beautiful sea of blue in that front grass,” Picklesimer said. “This couldn’t happen without a City Council that’s in tune to their citizens. It’s really turned out to be a neat thing.”