Tom McDaniel is a native of Miami, Florida. 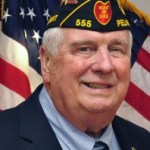 At age 21, he joined the Army and worked as an Operator Specialist at his duty station, North America Air Defense in Austin Texas.

As a soldier, McDaniel excelled from Soldier of the Month to Regional Soldier of the Year, where he came in second place in competition against six others.

McDaniel received an honorable discharge in 1965.

He enjoyed a career in business forms design and management.

The couple have five children and five grandchildren.

McDaniel is a charter member of the American Legion Post 555 and has served in numerous positions since its inception.

He served as public relations officer the first year and became the commander in the second year.

He held the office of commander the third and fourth year.

Currently, McDaniel is the committee chairperson in charge of Boys State.

“We raise money to send participants to Boys State, which is held on the campus of the University of Alabama in Tuscaloosa,” he said.

The program is designed to educate youth in the duties and privileges of American citizenship. Students from across the state are chosen based on their demonstration of leadership, hard work, strong morals and motivation in school and community activities.

“School principals and counselors make recommendations for participant prospects,” he said. “Hope Christian School, which is a private school, just became a participant in the Boys State initiative. Our mission is to give back to the community. We distribute Christmas packages to the Veterans Administration each year. You discover that even if you may not have met someone before, you still have something in common with them. It has been the most gratifying experience since being a Legion.”

Tom and his wife have been members of Lakeside Baptist Church in Hoover for the past 25 years.

“I am on the Usher Board and used to be in charge of the evening service,” he said.

After Karen’s father fell ill, their involvement lessened a great deal because of the need to be available to assist family members with his care.

RSVP is proud to have another veteran on its team and to honor him for his service to this country.